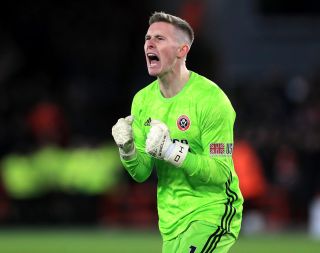 Dean Henderson has set his sights on becoming the first-choice goalkeeper for club and country this season.

The 23-year-old signed a new five-year contract with Manchester United last week, having impressed during two seasons on loan at Sheffield United.

Not only did his form for the Blades earn him a fresh deal at Old Trafford, it also saw him drafted into Gareth Southgate’s England squad.

He will now compete against Jordan Pickford and Nick Pope in an attempt to make his Three Lions debut in the forthcoming Nations League games away to Iceland and Denmark.

The new Premier League season then kicks off with David De Gea, whose form was criticised towards the end of the 2019-20 campaign, standing in his way of the number-one spot at United.

“Look, 100 per cent the aim is for me to play football next season and I don’t think I want to be not playing after last season, coming off a good season with momentum,” he said.

“It wouldn’t be clever for me to sit around and not play football, I don’t think it would help any parties at all.

“Listen, for me with Man United, David De Gea has obviously been a great goalkeeper first and foremost for many years and he’s been phenomenal.

“That’s something I aspire to be, to have a career like him at the club – so I’ll be going back in on the first day of pre-season working my socks off to get in that starting line-up.

“It’s something I’ve always wanted. I’m so close now so I’m not going to give up – I’m going to put the pressure on. I respect David. He’s been a phenomenal servant for the football club.

“I feel like a new signing at Man United. I haven’t been in the building for five years. I’ve had a lot of time away. So I’m not too sure what the atmosphere is like.”

Henderson admits he is “100 per cent” clear that he cannot establish himself at international level if he remains behind De Gea at United.

Having joined United’s academy at 14, Henderson – who also previously spent time out on loan at Stockport, Grimsby and Shrewsbury – is yet to make a first-team appearance for the club.

He impressed enough, though, during that time to earn 11 England Under-21 caps and is now aiming to make his bow for the seniors.

Pickford has been Southgate’s first-choice for the majority of his England tenure but the Everton goalkeeper has been criticised for some of his performances last season.

“So I’m just going to keep working hard every single day, overcoming my little challenges, my little goals and I’m sure one day I’ll get to where I want to be.

“I know what I’ve got to do – I’ve got two very good goalkeepers here with me and we’re all challenging for the number one shirt and it’s obviously something that I aspire to be.

“So I’m working hard every single day to do what I can do to class as Gareth’s number one – but I know I’ve got to get past two very good goalkeepers.”