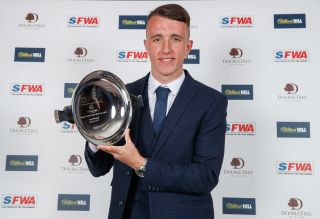 David Turnbull was delighted to seize a second chance to sign for Celtic after overcoming the worst moment of his life when a failed medical scuppered a move last year.

Celtic have agreed to pay Motherwell a similar fee to the potential £3.25milion on offer in June 2019 after Turnbull bounced back from surgery which followed the discovery of a latent knee problem.

The midfielder was coming off the back of his breakthrough season, having netted 15 goals in 30 league games, but has proven in recent weeks that he is back to form and fitness following two operations.

Motherwell said the fee was nearly double their previous transfer record – which was the £1.75million received from Celtic for Phil O’Donnell in 1994.

Absolute buzzing sign with @CelticFC been a crazy year for me but all worth it at the end! Can’t wait to meet everyone and get out there and get started!💚 https://t.co/hfMw31U5mQ— David Turnbull (@10DavidTurnbull) August 27, 2020

The 21-year-old said on Celtic’s website: “To join the biggest club in Scotland, I’m just delighted.

“Looking back, the injury was the worst time of my life, really. It was so hard to take, but I knew that if I worked hard, kept my head down, the chance could come around again, so long as I stuck to it. Now, I can’t wait to get started.”

Turnbull’s arrival has given Celtic a much-needed lift following their Champions League exit against Ferencvaros and the Scotland Under-21 international is eager to contribute in the club’s quest for 10 consecutive titles. He could make his debut against his former team on Sunday.

“The success of Celtic in recent seasons has been incredible,” he said. “They’ve been so consistent as well, which is the root of their success. As soon as I’m required, I’m ready.

“I’ve played in the first five games of the season, I’ve managed to get a goal, I feel really fit and I’m just raring to go and make my mark here at Celtic.

“It’d be brilliant to win silverware this season at Celtic. I obviously grew up playing with Motherwell, and while we were involved in cup finals, there was maybe less of an expectation to get there.

“It’s the opposite at Celtic, so to be involved in big games, tournaments and cups would be an honour for me and my family. I can’t wait to do whatever I can to help Celtic win more trophies in this important season ahead.”

Turnbull signed a new contract with Motherwell after making his comeback just before lockdown, thus ensuring his boyhood heroes were well compensated for his ultimate departure.

The fan who lived the dream and now leaves behind a legacy.— Motherwell FC (@MotherwellFC) August 27, 2020

Fir Park chairman Jim McMahon said he had mixed emotions over the transfer, which follows big-money sales of the likes of Louis Moult, Marvin Johnson, Cedric Kipre and James Scott in recent seasons.

McMahon wrote on the club’s website: “As chairman, I am delighted with this clear vindication of our strategy. For the health and prosperity of our fan-owned club, we must continue on this path.

“As a fan, I also feel the loss of such talented individuals who contribute to our success on the pitch. Everyone at the club does, particularly our manager. Stephen (Robinson) has performed phenomenally across his almost four years in charge.

“The money we receive for David will allow us in part to build up the strategic reserve, which helps secure and sustain us through such difficult and uncertain times.

“But this is also an opportunity to invest in the infrastructure, for example our training ground, academy and other facilities, with a view to providing an even better environment for player development.

“We wish David every success for the future. He is a local boy who has supported this club all of his life and has given us many memorable moments on the pitch.

“His agreement to extend his contract is a testament to his integrity and in doing so he secured the club’s interests as well as his own.

“As I’ve said above, as a fan, I regret to see him leave Fir Park. But the club can take pride knowing we have played a part in helping develop this exceptionally talented footballer and young man, whose legacy will endure for many years.”