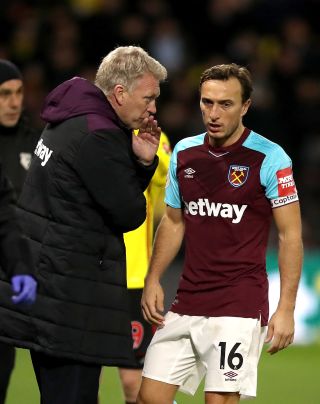 Following the Baggies’ permanent signing of the Congolese winger on a five-year deal, Noble tweeted: “As captain of this football club I’m gutted, angry and sad that Grady has left, great kid with a great future!!!!!”

Speaking ahead of his side’s first game of the Premier League season against Newcastle on Saturday, Moyes said: “I haven’t had any conversations with him about it but it showed a real togetherness with the players and what Grady Diangana meant to the players and the club. He was really important to us.

“Mark has been in that situation for about 20 years and he just showed how he felt. We are all entitled to our opinion.”

The Hammers have made just one signing this season, that of former loanee Tomas Soucek on a four-year deal, while a total of eight players have left the club.

However, Moyes insisted the Hammers are trying to bring in new players before the end of the transfer window on October 5, having been linked with Burnley’s James Tarkowski.

Speaking about the reported asking price for the centre-back in the current market and if that would prevent West Ham from signing him, Moyes said: “Yeah I would have to say so in this market.

“We have all taken a bit of a hit from the Covid situation, we certainly have and because of that it will make it difficult.

“We are trying to get players, ones that will improve the squad and not just bring them in willy-nilly. I want to get players I want.

“If Burnley say no and Sean (Dyche) says no then I respect that decision but yet, we have made a couple of offers for him.”

On whether the club would make a further offer for Tarkowski, he said: “I don’t know it is a decision for the board and if they think it is right. Obviously we will get to a limit where we feel we can’t get much further but it could be a price they might accept.”