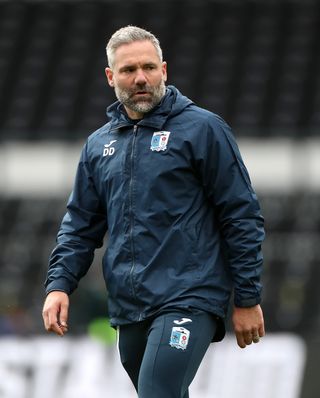 Manager David Dunn admitted he was proud of his hard-working Barrow side despite their Carabao Cup penalty shootout defeat away to Championship Derby after a goalless draw.

Derby goalkeeper Kelle Roos saved three spot-kicks as his side edged the first-round tie 3-2 in the shootout but Dunn reserved praise for his League Two newcomers for battling for 90 minutes before the disappointing knockout.

Dunn said: “They should be disappointed about losing any football match but we knew it was a massive challenge coming here so they should be very proud of themselves.

“I thought we had some really good chances, certainly first half when we broke away and on another day we might have had something to protect.

“It didn’t surprise me too much because I know they work hard and if we had a really good shape against Derby we could frustrate them and up until the last 15 minutes, we frustrated them into very few chances.”

Barrow had the best chances in the 90 minutes on their return to Football League action after 48 years and should have been ahead by half-time.

A quick break in the 20th minute saw Dior Angus sprint away from George Evans but a heavy touch allowed Roos to come out and save.

Two minutes later, Jack Hindle got behind Derby on the right but he chipped the ball wide.

The home side had plenty of possession but created little although Matt Clarke should have done better with a 37th-minute header.

Jack Marriott twice came close before the tie went to penalties with Angus putting away the opening spot-kick but – after Roos and Barrow goalkeeper Joel Dixon performed heroics – Morgan Whittaker held his nerve to win it for Derby.

Dunn was delighted with Barrow’s show, adding: “It’s an excellent performance from us to do that because – let’s be honest – they’re a good Championship team who will probably look to get out of that league this year.”

Derby manager Phillip Cocu admitted it was a frustrating afternoon and asked for more from his Derby side.

He said: “All credit to Barrow. They made it difficult to create, not (let us play in) a lot of space, but it also confirms that at the moment we are not creative enough, we don’t have enough power in the forwards.

“We need to strengthen the team in that area.”

Cocu was full of praise for Roos following his penalty heroics, adding: “We have to thank Kelle (Roos) for great saves in
the penalty shootout.

“Now we are in the next round which in the end is the goal in the cup but we definitely have to improve on how we finish in the final third.”

Defenders Jayden Bogle and Max Bird were left out following speculation linking them with Sheffield United and Cocu said: “I know about the rumours but at the moment I cannot confirm anything.

“It could be that players will go out and definitely there will be players coming in.”