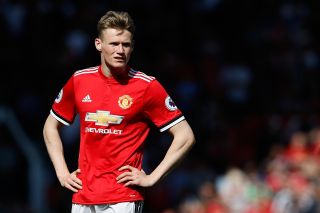 Darren Fletcher is convinced Scott McTominay still has a major role to play for both Manchester United and Scotland.

The 23-year-old started just four of the 14 games Ole Gunnar Solskjaer’s team played on their return from lockdown last term after being squeezed out by Paul Pogba and Bruno Fernandes.

And he is going to find it even harder to find a place in midfield after seeing United splash out £34.1million to sign Donny Van De Beek from Ajax.

On the international front, McTominay has also been in and out of Steve Clarke’s team, starting just once in the Scots’ last four games.

Former Red Devils midfielder Fletcher knows how tough it is coping with the twin pressures of satisfying both the United faithful and the Tartan Army.

And he has full faith that McTominay will win over his doubters for club and country.

“I think he’s had a fantastic season. He didn’t feature as much post-lockdown, but I think that was more to the form of other players rather than his.

“He was arguably one of United’s best players beginning of the season and when the team was struggling he was pulling in some big performances.

“I think sometimes it happens like that, really. Circumstances dictate that sometimes the person that’s got your jersey is just in such good form or the team’s in good form that you just can’t get in.

“It’s nothing that you should take personally and you just have to bide your time and wait for your opportunity because there does come a time where you’re in the team and you’ve got the name on the jersey and somebody else is on the outside looking in. That’s the way it is at a big club.

“I’m sure Ole and the people at the club are telling Scott how important he is and I’m sure his levels will be determined to get back into the team.

“I think he’s got a massive future ahead for Manchester United. I think he can become whatever you want him to be in midfield, I really do. He could be a destroyer, he could be box-to-box, he’s got goals in his game. He could potentially even do a job at centre-back as he gets more experienced.

“I think he’s going to be invaluable for United going forward and Scotland obviously.”

McTominay is among a list of midfield options available to Clarke – and Fletcher just wishes the Scotland boss had the same riches elsewhere.

“We’ve got an abundance of central midfielders and it’s a shame, really,” said the retired Champions League winner.

“If we could play a team of central midfielders we’d be alright, and left-backs, but it seems to kind of be the way it is sometimes with Scotland.

“We always seem to be missing out on a certain position where you think ‘ah, a little bit more quality there’ or whatnot.

“But ultimately you can’t do anything about that, really, and the manager is a good manager, got a good squad of players and I’m desperate for them to qualify.

“I think they have got a great opportunity in the play-offs that obviously got delayed, but I think they’ve got a massive opportunity when that comes around again.”

:: Darren Fletcher is playing in Soccer Aid for Unicef, which takes place on Sunday 6th September, live and exclusive on ITV and STV from 6.30pm. Every £1 donated will become £3 thanks to the UK Government and Gavi, The Vaccine Alliance.