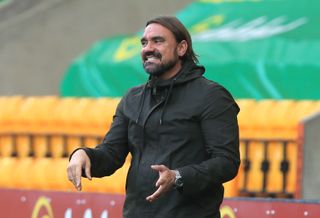 Norwich head coach Daniel Farke admitted his side missed their international players after crashing out of the Carabao Cup following a 3-1 defeat at Luton.

The Canaries were without 15 players at Kenilworth Road, including Finland striker Teemu Pukki as they were beaten by a James Collins’ hat-trick in the final 16 minutes.

Farke said: “We knew today was for some of them a good chance to shine and you hope they take the chance.

“I feel a bit sorry for the lads who couldn’t grab the chance, we have to work on it and one day they will be ready.

“They did perform a bit better in the second half, for some of them it’s a reality check on how difficult it is to be competitive at Championship level as they were a proper Championship side.

“They went to win the game and you have to be good to get points at this level, so we will have to fight unbelievably hard.

“The penalty was never a situation where they should get a penalty, but we reacted quite well, scored an equaliser.

“Then the second situation we lost an easy one v one, then we didn’t defend the crossing situation and then we weren’t switched on in the centre, these are mistakes we made.”

Town striker Collins grabbed his first from the penalty spot after 79 minutes when Pelly-Ruddock Mpanzu was fouled by Mario Vrancic, before Norwich’s summer signing from Everton Kieran Dowell equalised for the Canaries two minutes later.

However, Collins was on target again within 60 seconds, volleying home via a slight deflection from inside the area, to make it 2-1. He then converted substitute Jordan Clark’s unselfish cross from close range to complete his treble and send Town through.

Hatters boss Nathan Jones said: “For him to get a hat-trick in the first game of the season is fantastic as he’s someone we think a lot of.

“I thought we were excellent from start to finish.

“They’ve had a few players missing but they still had a fantastically strong side and we were excellent in terms of our shape and our press.

“We could have been better first half, but then we looked the more dangerous side and I’m really pleased.

“There are things we can improve on all-round as this was our fifth pre-season game against the highest ranked opposition, but it was an excellent defensive performance

“We wanted to win the game, it was as strong a test as we could have had and we feel like we are ready now.”