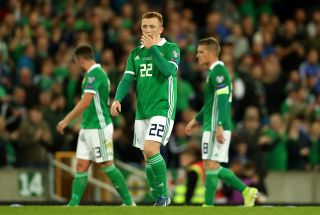 Northern Ireland Under-21s slipped to a 1-0 Euro qualifying defeat to Denmark in Ballymena.

Andreas Olsen scored the only goal from the penalty spot in the second half to send Northern Ireland to a third defeat in Group H, which ends their hopes of reaching next year’s finals.

Andy Crosby’s side drop to fifth in the table, while Denmark remain top having taken 19 points from seven matches.

Home goalkeeper Conor Hazard made several fine saves to prevent the Danes from securing a wider margin of victory.

The hosts, who chalked up their first win of the campaign by winning 2-0 in Malta on Friday, went closest to scoring through Shayne Lavery, who fired over from a tight angle.

Linfield striker Lavery had started the game less than 24 hours after stepping off the bench in the senior side’s 5-1 home Nations League defeat to Norway.

Northern Ireland Under-21s play their next qualifying matches in October at home against Finland and Ukraine.