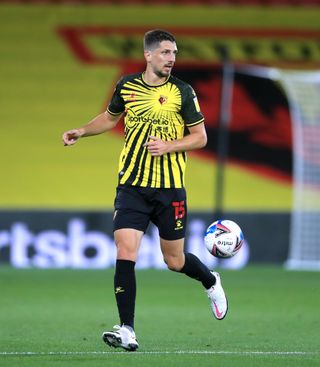 Watford began life back in the Sky Bet Championship with a victory as Craig Cathcart’s early header saw off Middlesbrough to give head coach Vladimir Ivic a winning start.

The Hornets saw a five-year stint in the Premier League end with relegation in July, but their push to earn an immediate return to the top flight got under way with a 1-0 win over Neil Warnock’s side at Vicarage Road.

Cathcart’s powerful header was enough to seal the points as Ivic had to make do without the likes of Troy Deeney, Danny Welbeck, Will Hughes, Ismaila Sarr and Craig Dawson.

The visitors created a few decent chances, most of which fell to captain Britt Assombalonga, who could not find a way past Ben Foster in the Watford goal.

The only goal of the contest came with 11 minutes on the clock, as Boro were not alert to a short Watford corner and Ken Sema – back at the club following a season on loan at Udinese – swung in a cross which Cathcart headed home past debutant Marcus Bettinelli.

Assombalonga’s first sniff of goal came at the midway point of the first half, as he fired in a strike from an acute angle which Foster did well to turn behind with his feet.

Ivic handed a first league start to January signing Joao Pedro and the 18-year-old Brazilian forward looked at home at this level, sending a header wide as he looked to mark the occasion with a goal.

Middlesbrough enjoyed more of the ball in a second half which did not contain too many chances for either side.

Assombalonga’s turn and shot was brilliantly tipped behind by Foster, with Ivic turning to loan signing Glenn Murray in an attempt to have more of a presence at the top end of the pitch.

Warnock’s men would continue to push on, Assombalonga heading a Marcus Tavernier free-kick wide when the striker should have done better.

Despite a quiet second half for Bettinelli, Watford toasted their first Championship game since 2015 with three points ahead of the remaining opening-round games over the course of the weekend.

Whether Ivic can maintain the momentum rests largely on which players are sold before the transfer deadline, with Deeney and Welbeck reportedly close to joining Premier League clubs.

But in young, hungry players like Pedro and Jeremy Ngakia – making his debut at right-back following his move from West Ham – coupled with old hands such as Foster, Murray and match-winner Cathcart, he will be hopeful of a successful first campaign in English football.