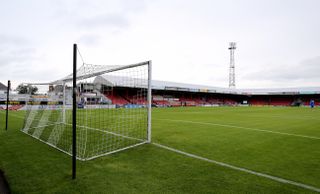 Another EFL match has fallen victim to Covid-19 after the league announced Grimsby’s League Two game against Bradford this weekend had been postponed.

The Lincolnshire club has players and staff still self-isolating, which forced their match against Cheltenham on Saturday to be called off as well.

The EFL said the circumstances surrounding the postponement would be the subject of an investigation, as was the case for the Cheltenham game.

Leyton Orient’s match against Walsall last weekend was also postponed, with the Os having to forfeit their Carabao Cup tie against Tottenham last Tuesday.

EFL chairman Rick Parry said over the weekend that the competition was “reviewing” the testing policy adopted for the season.

He told the Daily Mail: “We obviously had a major problem at Leyton Orient. I don’t think we needed a wake-up call but it has given us one.

“We are now reviewing, particularly now that the infection rate is rising. There is no room for any complacency. We will do some increased testing. Maybe it will be random, maybe it will be periodic.

“But, again, the real message is everyone has to stick to the protocols and observe them. If you don’t then things can go quickly wrong. The infection rates being what they are, you have got to think of the nation and we can’t put pressure on the NHS again.”

The Hertfordshire club discovered two players had tested positive for coronavirus when they tested all players and staff in the wake of an initial positive case being recorded on Thursday.

The club’s chairman Phil Wallace and Rochdale chief executive David Bottomley both called for weekly testing last week, with the latter saying it was essential for the continuation of the competition.

Grimsby and Hull announced their EFL Trophy tie on October 6 had also been called off, but this postponement has yet to be confirmed by the EFL.