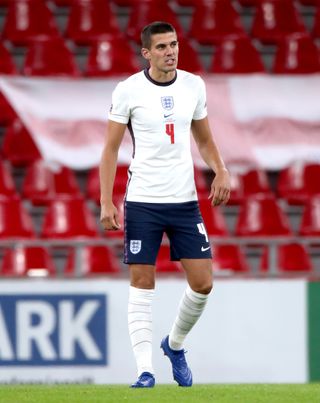 Conor Coady hailed his England debut as “a dream come true”, but admitted he was disappointed to have to settle for a draw with Denmark.

The Wolves defender looked assured on his first appearance for the senior side in the goalless draw in Copenhagen.

When asked by Sky Sports how proud he was of his debut, Coady said: “Immensely, it is a dream come true. I said how much it means to me. There are some world-class players in this team, don’t let anybody else tell you differently.

“It is 0-0, a clean sheet, we are happy with that, but disappointed we didn’t come away with three points.

It's been 3,451 days since a Wolves player last represented the England senior team.— Wolves (@Wolves) September 8, 2020

“I’m 27, I’m here to help England, these players and the team – that is the main goal, I don’t care about my own performance as long as we win.

Midfielder Jack Grealish won his first cap too as a second-half substitute.

“I was actually a bit emotional,” he said.

“It is something that you dream of, every child in England dreams of it since they were a little kid – playing for the England senior team. I was so privileged coming on and it was a shame we couldn’t win in the end.

“I want to thank (manager) Gareth (Southgate) himself for giving me the opportunity and I hope it is the first of many. My first involvement…I’m a bit gutted to be honest because I went on a little run and should have pulled the trigger or picked someone out.”

Southgate said he had “learned a lot” from the match.

He added: “We tried a new system which we will get better at given everything we have had to deal with – 10 pull-outs for various reasons.

“So we felt we wanted to start with stability – we could have probably been a bit higher with attacking threat in the first half, but we were in control and, given the stage of the season the players are at, that was really important.

“Second half we started to accelerate the game with some of the changes, putting Mason (Mouont) into midfield made us more forward-thinking and Jack did the same.

“Ainsley (Maitland-Niles) I thought did really well, so I was very pleased with the players who made their debuts. I thought Conor Coady was excellent and Eric Dier has had two excellent games at centre-back for us, so the back three today was very solid.”