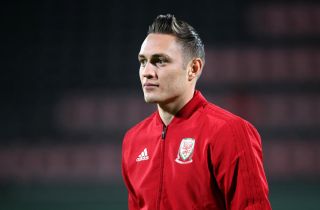 Connor Roberts feels Wales must find their form from a year ago to qualify for Euro 2020.

Wales kept in the hunt for a finals place next summer with a 2-1 home victory over Azerbaijan on Friday night.

But it was another scratchy performance from Ryan Giggs’ side and victory against opponents ranked 109 in the world – 85 places below Wales – was again down to their talismanic captain Gareth Bale.

The Real Madrid forward headed home six minutes from time to move Wales above Slovakia into third place and to within three points of Group E leaders Croatia and Hungary.

“If we want to compete with them and get what we want, we have to play well.

“The boys have to go back to their clubs after Monday (when Wales meet Belarus in a friendly), play games and get good form.

“Then when we meet up again we can hopefully do the business.”

Giggs was appointed manager in January 2018, just 18 months after his predecessor Chris Coleman had guided Wales to the semi-finals of Euro 2016.

His reign’s high point came last September with an exhilarating 4-1 Nations League victory over the Republic of Ireland.

But Giggs has failed to make the most of the talented squad at his disposal in the last 12 months, much to the annoyance of an increasingly-unsettled fan base.

“There’s still a lot to come,” Roberts said. “Against Croatia we were touch and go, we were decent in patches.

“We had the two disappointing games (away to Croatia and Hungary) in the summer when we weren’t at our best.

“We weren’t at our best again against Azerbaijan. But hopefully things click sooner rather than later so we can get some momentum.”

Giggs will hope to include Aaron Ramsey for the trip to Slovakia and the home game with Croatia next month.

Ramsey has yet to feature in Euro 2020 qualification because of the hamstring problem which blighted the end of his Arsenal career and have delayed his Juventus debut.

“Since I’ve been in the squad he’s only played a handful of games.

“But when he has, he does make a difference.

“As well as Gaz (Bale), you’ve got him up there and you’ve got two world-class players playing for brilliant clubs.

“You always want your best players on the park, and hopefully he can be back fit and with us next month.”