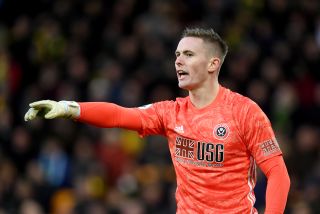 Sheffield United boss Chris Wilder knew all along that Dean Henderson would return to Manchester United for this season but insists he has another top English goalkeeper in Aaron Ramsdale.

Henderson spent the past two seasons on loan with the Blades, playing a key role in their promotion from the Championship before helping the club to a ninth-placed finish on their return to the Premier League.

It was playing in the top flight last season where Henderson established himself a reputation as one of the best English goalkeepers in the country and added to his belief that he could challenge David De Gea for the number one spot at Old Trafford.

Henderson recently signed a new six-year contract at United and will be part of Ole Gunnar Solskjaer’s first-team squad this campaign – something Wilder knew would be the case.

“Dean was fabulous for us and we were good for him too and he always wanted to be the number one at Manchester United.”

Wilder has replaced Henderson with Ramsdale, who began his career with the Blades at the club’s academy, paying a reported £18.5million to Bournemouth following their relegation from the Premier League last season.

Like his predecessor, Ramsdale is an England Under-21 international, and Wilder feels the club have another gem on their hands.

“Obviously there are going to be comparisons, we can’t get away from that, but now we have a permanent goalkeeper who is hopefully going to play for Sheffield United for a long, long time and he will grow with the team and grow with the club,” said Wilder.

“He has all the attributes to play at this level, to communicate with his back five, to make big saves at important times and that’s the reason why we’ve invested what, from our point of view, is a big chunk of change in what is a really good acquisition and an excellent bit of business.

“If you look at what we’ve paid for an outstanding, young English goalkeeper, an England Under-21 international, who is only going to get better and better and wants to come to this football club, and the way Gareth Southgate has spoken about him in that group of goalkeepers who are all coming through now – the likes of Dean (Henderson), Jordan Pickford and Nick Pope.

“He had a fabulous season individually last season, obviously it was a disappointing one for his team, but he has that experience of Premier League football and I’m really looking forward to working with him this year.”

Ramsdale will start in goal on Monday night when the Blades get their new campaign under way against Wolves at Bramall Lane. Fellow summer signings Max Lowe, Jayden Bogle, Oliver Burke and Ethan Ampadu are also in contention.

Wilder has a couple of unnamed players nursing injuries who he said were “touch and go”. One of the players could be club record signing Sander Berge after the midfielder was sent home from international duty with Norway last week after suffering a knee problem.