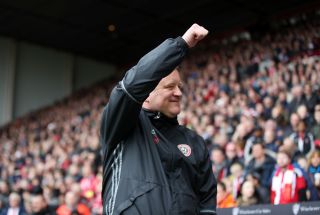 Sheffield United boss Chris Wilder admits he has been left confused by the pilot scheme allowing fans into grounds this weekend.

Nine English Football League matches are set to be played in front of crowds of up to 1,000.

That is after the Government granted the EFL permission for selected fixtures to be used as pilot events for the programme to reintroduce spectators to venues – on a socially-distanced basis – amid the coronavirus pandemic.

We’re delighted to be able to welcome a crowd back to the Riverside this weekend 🏟 ⚽️ #UTBhttps://t.co/Hu3iTQr3n0— Middlesbrough FC (@Boro) September 16, 2020

When asked about that, Wilder made reference to the ‘rule of six’ as he expressed his bemusement at the situation.

“I just don’t where we are with it all, I’ve got to say, I haven’t got a clue,” Wilder said ahead of his side’s Carabao Cup clash with Burnley.

“So I’ve got to say I’m like the majority of the people in this country – I have not got a clue what’s going off, haven’t got a clue.

“If anybody can help me… I’ll try and affect that game of football and help with the staff and the boys getting a result but everything else, all that other stuff, I ain’t got a clue.”

Any social gathering of more than six people in England is against the law, with people facing fines if they do not abide by the new measure, which applies to both indoor and outdoor settings.