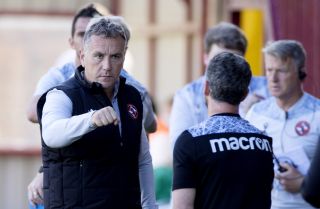 Micky Mellon insists there will be no split loyalties as his Dundee United side prepare to host his boyhood favourites Celtic.

The Paisley-born United boss spent the majority of his adult life working in England having started his playing career with Bristol at the age of 17.

Now 48, he is set to take on the team he supported as a boy for the first time when Neil Lennon’s team visit Tannadice on Saturday.

But Mellon has nailed his Tangerine colours to the mast, insisting he left his allegiances to the Hoops behind long ago.

He said: “Let me make this quite clear. Dundee United is my club.

“I’ll be doing everything I can professionally to win games of football for Dundee United.

“There will be no nostalgia. Dundee United is my team now.

“I’m fully focused on doing that in every game. I left Scotland a long time ago and moved away from all that stuff.”

Celtic are returning to Scottish Premiership action for the first time since they were placed in a mini lockdown on the back of Boli Bolingoli’s coronavirus breach.

But Mellon wants his Championship winners – who have taken seven points from their four games so far – to believe they can cause an upset.

He said: “We’re in a transition year, up a division, so every week is a big challenge for us.

“We’re welcoming the Premiership champions and you know when you play these big clubs that you have to get an awful lot right and take part in the match.

“You have to attack the challenge and that’s what it’s all about. So we will encourage the players to do just that because we believe at Dundee United we’re a big club in our own right.

“When we represent this football club we do it properly.”