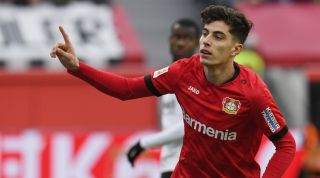 The Telegraph report that the Blues have offered an initial fee of around £58.6m for the attacking midfielder, who enjoyed another excellent season in the Bundesliga in 2019/20.

However, Leverksen value their prized asset at closer to £81m and have not yet budged on that valuation.

The two clubs have reopened discussions as Chelsea attempt to strike a deal as early as possible.

Frank Lampard wants to get his squad in place before the start of the new Premier League season, although Chelsea will begin their campaign later than most other clubs due to their participation in European competition this month.

The Blues boss has already strengthened in attack with the purchases of Timo Werner and Hakim Ziyech, and he is now keen to bring the protracted Havertz saga to a positive end.

Chelsea’s most recent bid contained an additional £13.5m in add-ons but they will have to increase that figure to land the Germany international.

Havertz is considered one of the best young players in Europe and Leverkusen do not want to lose him on the cheap.

Clubs across the world have been impacted by the coronavirus pandemic, yet Bayer are in a reasonably healthy financial position and do not have to let their star man go for less than his worth.

Their valuation of Havertz has already forced Bayern Munich and Real Madrid to drop out of the race for his signature.

Chelsea are therefore the only club attempting to acquire 21-year-old this summer, but they will need to increase their offer to get a deal over the line.

Chelsea will face Brighton in their first Premier League match of 2020/21, before a meeting with champions Liverpool in their second game.