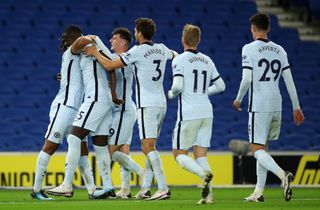 Chelsea reached the 2,000-point landmark in their Premier League history with Monday night’s 3-1 win over Brighton, the third club to achieve the feat.

Here, the PA news agency looks at how the Blues joined the elite club and who could be next.

Chelsea followed Manchester United and Arsenal to 2,000 points, with 13-time champions United unsurprisingly the quickest to get there.

The Red Devils took just 949 games, largely under the management of Sir Alex Ferguson, to reach the mark – doing so in February 2017 with a 2-0 win over Watford at Old Trafford.

The Gunners followed last season, moving to 2001 in 1,070 games with July’s 4-0 rout of Norwich. Chelsea were just seven games slower, with Monday their 579th win alongside 263 draws and 235 losses.

They have consistently been one of the top teams in the country since Roman Abramovich took control of the club, as is reflected in their points totals. They averaged 59.8 points per season before his takeover in 2003 and 77.7 under the Russian’s ownership, up to the end of last season.

That left them on 1,997 from 1,076 games at that point, with goals from Jorginho, Reece James and Kurt Zouma at the Amex Stadium making short work of the outstanding three.

There is set to be a fourth member of the club this season, with reigning league champions Liverpool well on track.

The Reds have 1,951 points from 1,077 games after beating Leeds on Saturday, meaning they will need at least another 17 games to reach the mark. January 13’s home clash with Burnley is therefore the earliest opportunity should they emulate their unbeatable early form from last season, with United then visiting Anfield three days later.

Ten teams have over 1,000 Premier League points, and again that number is certain to grow this season barring an unimaginable collapse.

Newcastle (1,319), Aston Villa (1,258) and West Ham (1,137) are the other members of the 1,000 club and Southampton are just 20 away on 980. After losing this season’s opener to Crystal Palace, Saints will need to wait until November at the very earliest to pick up the points required.

With Blackburn (970) not currently in the top flight, there is no prospect of any further addition to the ranks – Leeds and Leicester, the next two clubs in line, are way back on 692 and 672 respectively.