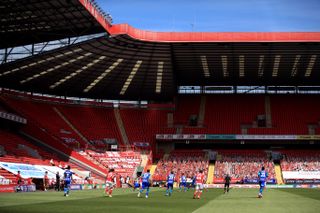 Charlton are hoping to use their opening home game of the Sky Bet League One campaign against Doncaster as a pilot event to let supporters in.

The English Football League will resume behind closed doors on September 12 as the country still battles the coronavirus pandemic.

But the Addicks have been working with the Stadium Grounds Safety Authority to help the EFL devise protocols ahead of a scheduled phased return of spectators in October and their game with Rovers on September 19 at The Valley has been put forward as a test event.

🗓️ The club is likely to run a test event to allow some fans into The Valley for the first home game against Doncaster on September 19th, with full details to be announced once confirmed— Charlton Athletic FC (@CAFCofficial) August 21, 2020

Charlton said in a statement on their official website: “The club is likely to run a test event to allow some fans into The Valley for the first home game against Doncaster on September 19, with full details to be announced once confirmed.

“Meanwhile, it is hoped that crowds of between 6,000 and 8,500 will be allowed back into The Valley by October, providing government guidelines allow it.”

The government reinstated rules which allowed a restricted number of spectators into sporting events last week, with people attending the Crucible to watch the final of the World Snooker Championship.

League Two outfit Crawley also announced that they hoped to use their People’s Pension Stadium as a test venue for one of their fixtures in September.

Town are due to take on Millwall in the first round of the Carabao Cup and Scunthorpe in league action on September 5 and September 19 respectively, and added that all fans would have to wear face coverings while attending matches.

A statement on the club’s official website read: “Crawley Town Football Club have been working tirelessly to ensure all protocols and guidelines are met with the aim of allowing a percentage of fans to consistently and safely return to The People’s Pension Stadium from the start of October.

“As things currently stand, there is also the aim of utilising a September fixture as a test event, again allowing a percentage of fans into the ground to safely view the game.

“In order to move around the stadium in a safe manner, and for the club to be able to get a reasonable number of supporters inside, all supporters will be required to wear a face covering.”