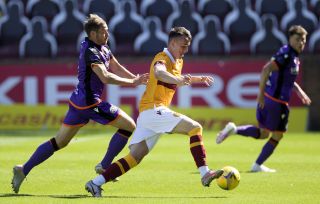 Stephen Robinson admits he has no idea if Celtic target David Turnbull will still be a Motherwell player by the time his side kick off their Europa League campaign on Thursday night.

The Scotland Under-21 international did not train with his Fir Park team-mates as they put in their final preparations for facing opening qualifying opponents Glentoran.

Hoops boss Neil Lennon confirmed on Tuesday that the clubs had re-entered negotiations as they look to resurrect the £3million deal they first agreed last year.

The move was called off on that occasion when Turnbull’s medical uncovered a serious knee issue, but Lennon is ready to push ahead after watching the Well playmaker’s impressive return to form after a seven-month lay-off.

But Robinson was playing it coy as he met the media ahead of his side’s showdown with the Irish Cup winners.

Asked if Turnbull would be involved against Glentoran, the Steelmen manager replied: “I’m not sure at this stage. I’ve no idea where we’re at right now.”

Robinson was clearer on how much Turnbull is worth to his side but insists his side can cope without their main creative spark, despite failing to win any of their first five Scottish Premiership fixtures so far this season.

He said: “I don’t get involved in the money side – but if he was valued at £3m last time he’s certainly a £3m player in my eyes.

“As a player, not just to me, David is a top, top talent and one of the best I believe Scotland will have ever produced.

“I can’t sing his praises high enough in terms of his mentality and his talent.

“But listen, we lose players every year. I make no mistake, David Turnbull is a top-class footballer, but that is the model at Motherwell. That’s how we survive.

“We develop players, we’ve done that consistently over the last three and a half years. We sell players every single year.

“And we have spells where we don’t win games because that’s what happens when you develop players and things go round in circles. We’ve got eight new players in the team, so it goes round. Sometimes it takes a little bit longer.

“I’m delighted for the players who move on because it’s tribute to the staff here and the work they do.

“We’ll be delighted if it happens – but if it doesn’t we’ve got a very talented boy.”

Robinson has not had to do much homework on his side’s opponents, but has made sure Motherwell are clued up on Glentoran’s threat.

He said: “I think I’ve worked with 90 per cent of the players at some stage with the Northern Ireland set-up.

“They’ve all grown up a wee bit and grown beards.

“What they are is group of guys with a point to prove. They are a team we will give the utmost respect to.

“A lot of them have come back from England for various reasons – injuries, bad luck, bad timing – but there’s talent there.

“Northern Irish football is on the up and a lot of heavy investment. They spent £40,000 on Ruaidhrí Donnelly having spent over £100,000 at Christmas.

“So we are well aware of what we’re coming up against and, believe me, there will be no surprise packages.”