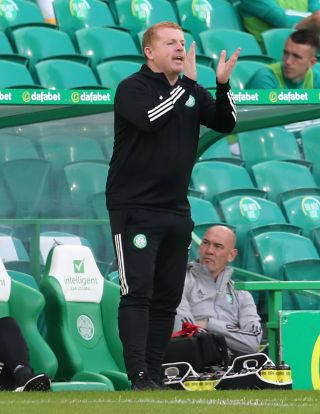 Boss Neil Lennon stressed his desire to keep Odsonne Edouard at Celtic after the French striker sat out the 3-2 win over Livingston which took the Hoops top of the Premiership.

Livi midfielder Jason Holt scored a 16th-minute penalty but the home side responded with goals from  Callum McGregor, Ryan Christie and Albian Ajeti before a late strike by defender Julien Serrano ensured a nervy end.

Celtic moved ahead of Rangers on goals scored having played the same number of games, albeit the Light Blues have the chance to go back top on Sunday against Hibernian.

Lennon had said before the game Edouard was fatigued and asked afterwards about the prolific 22-year-old, linked with English clubs such as Arsenal, Aston Villa and Brighton, he said: “I don’t want to sell him.

“We have had no bids and no confirmed interest in him so I am hoping by the end of the window he is still a Celtic player.

“He is a good kid, his attitude has been fine, he is not causing any problems behind the scenes as far as I’m aware.

“He was honest enough to say he didn’t feel fit enough to start and we take his word for that.

“He was away with France after missing the previous two games for us.

“He played Saturday and Wednesday and I spoke to him on Friday and he said he was struggling to start the game. So you have to take it and look after the player.

“He is not for sale. It is all speculation at the minute. The club will do what is best for the club and we will act accordingly if any scenario comes up but there is nothing to report on that at the minute.

“I know there will be  lot of talk about Odsonne but he is going to be fit for Thursday (against Riga in Europa League) and we know what a top player he can be.”

Lennon, who declared himself “really pleased to be top of the league” was asked about defender Kristoffer Ajer being linked with Italian side AC Milan.

He added: “It is disappointing these stories come out because there is no truth in it. It can be unsettling for a player as you can imagine.

“Again he is a player we don’t want to sell so we are having to deal with all the speculation.”

The defeat was a “big disappointment” for Livi boss Gary Holt, who claimed Celtic’s second goal was offside, saying. “You need those decisions to go your way.”

He added: “Carlo got in a great position, I give him great credit but he could miss it and it could go in because the keeper is set for a header.

“It is the last minute and he might have taken his eye off it.