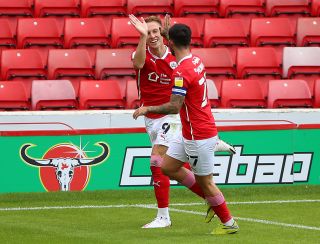 Cauley Woodrow’s goal early in the second half was enough to give Barnsley a 1-0 victory over Nottingham Forest in the first round of the Carabao Cup.

It was a deserved result after the home side created the majority of chances in the match and perhaps should have won by a bigger margin.

Gabriel threatened to make an instant impact, driving into the area inside the opening minute and shooting narrowly wide.

Ryan Yates also threatened the Barnsley goal early on, receiving the ball from Sam Ameobi before firing in a low shot from the edge of the area which was held by Jack Walton.

It took Barnsley 27 minutes to register their first effort of note, a flicked near-post header from Conor Chaplin which was tipped over by Brice Samba.

There were a couple of changes to the home line-up at the start of the second period with Clarke Oduor and Elliot Simoes sent on in place of Marcel Ritzmaier and Victor Adeboyejo.

Chaplin forced Samba to make a save shortly after the restart following good work from Woodrow.

Woodrow struck in the 49th minute, turning in the rebound after Oduor’s effort came back off a post.

Forest went close to making a quick response when Blackett’s header from a Joao Carvalho corner was turned wide by Walton.

Woodrow missed a great chance to extend Barnsley’s lead, putting a free header over from a good position after meeting Chaplin’s pinpoint cross.

Lamouchi made a couple of changes around the hour-mark, with Taylor and Alex Mighten taking over from Carvahlo and Ameobi. It was Taylor’s debut for Forest after signing last month following the end of his contract at Charlton.

A third Forest change was made in the 69th minute with Lewis Grabban going off and Freeman making his bow for Lamouchi’s men after signing on a season-long loan from Sheffield United.

Frieser, a 61st-minute replacement for Chaplin, had a chance to put the hosts further ahead. A ball from Simoes found him unmarked on the right-hand side of the area but his shot was parried by Samba, but Barnsley had done enough.