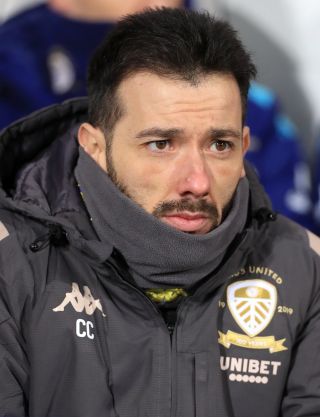 Carlos Corberan will implement lessons learned from Marcelo Bielsa as he shapes his Huddersfield side this season but said fans should not expect to see a carbon copy of the tactics that earned Leeds promotion to the Premier League.

Corberan was named Town boss in July following the abrupt departure of Danny Cowley, making the short trip down the M62 from Elland Road where he worked as first-team coach under Bielsa, helping the club end their 16-year wait for top-flight football earlier this summer.

The Spaniard will face a very different challenge at the John Smith’s Stadium, where the Terriers only avoided a second consecutive relegation in the penultimate match of the season.

As he looks to give Huddersfield a new identity, he said much of that would come from the players themselves.

“Every club has different players and different possibilities,” Corberan said. “We might have the same targets and the same objectives (as Leeds) in how we play the game and trying to control the game, but with our players I want to allow us to make it in different ways.

“We cannot say we will do it in the same style. We can say that we want to control the game, to dominate the ball from the back and play out from the back, and that in defence we want to make our opponents feel uncomfortable, which is something which is not easy to achieve.”

Corberan may only be 37 but he already has more than a decade’s experience in coaching, having become an assistant to Villarreal boss Juan Carlos Fernandez at the age of 26.

He held head coaching jobs in Cyprus before taking charge of Leeds’ under-23 side in 2017, with Bielsa adding him to the first-team set-up in 2018.

“Under Marcelo it is impossible not to learn things because all the time he is thinking about the team and how to improve the team and the players,” he said.

“The possibility to spend two years working with him was something special and something I appreciate a lot.”

The experience has also given Corberan a solid grounding in the Championship which could prove invaluable as Huddersfield look to avoid a second consecutive relegation battle.

Huddersfield and Leeds may be rivals historically, but Corberan had no problems with swapping one for the other.

“The fact that Leeds and Huddersfield are really close made me feel like I was familiar with them already,” he said.

“When you feel teams are close to you, you always want to watch the football around you so I followed Huddersfield when they were in the Premier League and I followed them last year. To come here made me feel excited.”