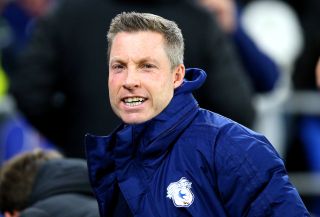 Cardiff manager Neil Harris admitted he could have “no complaints” over his side’s shock 3-0 defeat to Northampton.

The Bluebirds narrowly missed out on the Premier League only a few weeks ago but they were blown away by the League One newcomers.

Harry Smith got the ball rolling with an early penalty before Matty Warburton and Ryan Watson secured Northampton’s place in the second round of the Carabao Cup.

“Angry might be a little bit harsh but I’m hugely frustrated and disappointed with the players,” admitted Harris.

“I think for the first 25 minutes we showed we had better quality but they’re a strong side and after we conceded the penalty, one team played it as a pre-season friendly and the other played it like a cup tie.

“Huge credit to Northampton on their performance and their willingness to fight and to compete and do the dirty stuff and they were better than us so I have no complaints over the result.

“I’m disappointed with the players because it was a poor performance and not what I expected.

“We gave poor goals away and we missed four or five clear-cut chances ourselves but they scored their opportunities. Did we do enough to stop those chances? No, definitely not.

“We’ve had a good pre-season until now but it was clear today that there were some players didn’t suit the physicality of the game and I learnt a lot about some of them – the majority of which isn’t very good.”

Keith Curle, who led the Cobblers to promotion back in June, was delighted with his side’s performance.

“It was a very good win and the whole of pre-season has been about rebuilding a new squad with new personnel and new characters and different skillsets,” said Curle.

“But we haven’t gone away from our fundamentals and today was an opportunity for the players to showcase the fact that they’ve picked up and they understand those fundamentals and believe in what we’re trying to do.

“There are things we can work on and things we can improve but there were also a lot of pleasing things to come out of the game and as a first competitive fixture of the season, you have to say well done to the changing room.

“We do a lot of work on the basics of the game and I thought we did them very well today.

“The players are attentive, they know what’s needed and their application was excellent. Once we do the basics, we can be more creative when we get into the final third but as a foundation, it was very pleasing.”