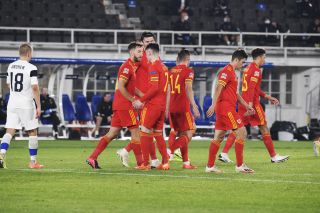 Wales welcome Bulgaria to Cardiff on Sunday in their second Nations League game.

The Dragons are seeking to build on their opening-day 1-0 victory over Finland in Helsinki on Thursday.

Manager Ryan Giggs’ bold policy to promote youth has paid off with a greater depth to the Wales squad than ever before. Giggs has given 18 players their debuts since his appointment in January 2018, with Dylan Levitt and Neco Williams, both 19, and Ben Cabango, 20, the latest to earn their senior stripes. The versatile Ethan Ampadu, 19, shone at the back in Finland and will be a key performer for years to come.

It was no surprise that Gareth Bale showed signs of rust on his return to football. Bale barely featured for Real Madrid in Spanish football’s post-lockdown period as his relationship with Zinedine Zidane came under further strain. The Wales skipper played just 45 minutes in Helsinki with Bulgaria in mind, and two games in less than 72 hours is a big ask for the 31-year-old given his match fitness. Giggs might hope to get an hour out of his talisman.

This time last year Kieffer Moore was set for his Wales debut in a low-key friendly with Belarus. A year on and Moore is a cult hero with Wales fans and so integral to the way Giggs’ side play. At 6ft 5ins he has the size and ability to hold the ball up and bring others into play. But the Cardiff striker also has the mobility to run into channels and a nose for goal, with his Helsinki winner making him the first player to score in three consecutive Wales away games since Aaron Ramsey in 2013.

Manchester United winger Daniel James won plenty of plaudits for his performance in Helsinki. James was lively all night, setting up an early disallowed effort before breaking down the left and putting the late winner on a plate for Moore. James has slipped down the pecking order at Old Trafford in recent months, but he looks a far more confident player with Wales where he is deployed on his favourite left-side flank.

At this stage of the season it is a balancing act for international managers. Giggs has to maintain momentum – Wales have won three on the bounce and are seven unbeaten – while putting some fresh legs into the team given the quick turnaround of the Finland and Bulgaria games. Will Vaulks and Harry Wilson could be introduced, while Giggs might be tempted to give Liverpool full-back Williams his first international start. David Brooks is fit again after a long international absence.