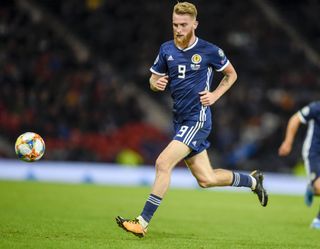 Cardiff utility man Callum Paterson has been called into the Scotland squad after Oli McBurnie joined fellow striker Lawrence Shankland in pulling out.

Shankland withdrew after missing another Dundee United game on Saturday – an ankle injury has ruled him out since the opening day of the Scottish Premiership season on August 1.

No reason has been given for the withdrawal of McBurnie, who was talked up by Scotland boss Steve Clarke when he named his squad, but the centre-forward was not involved in a 22-man Sheffield United squad for a training-ground friendly against Hearts on Friday.

The two withdrawals have left Clarke further lacking in strikers so the versatile Paterson has been added to the party for upcoming Nations League games against Israel and the Czech Republic.

Clarke was already missing Leigh Griffiths, with the Celtic striker yet to feature this season and struggling with a calf injury. Steven Naismith was omitted from the squad after Hearts’ pre-season was interrupted and United States-based Johnny Russell was unavailable because of coronavirus travel restrictions.

Oli Burke, who has flitted between the wing and a central role, and international newcomer Lyndon Dykes were the other two strike options in the original squad.

Former Hearts player Paterson has played up front for club and country, as well as right-back, but has mostly played in midfield for Cardiff.

The 25-year-old’s previous Scotland appearance came in Alex McLeish’s final game in charge, the 2-0 win in San Marino in March 2019.

He started up front but suffered an ankle injury which ended his season and he has had a long wait to get into Clarke’s squad.

The powerful player has won most of his 12 caps at right-back and is yet to score an international goal but earlier this year he admitted he wanted to earn a recall as a striker or attacking midfielder, where he plays for his club.

He netted seven goals in 42 appearances for Cardiff last season.