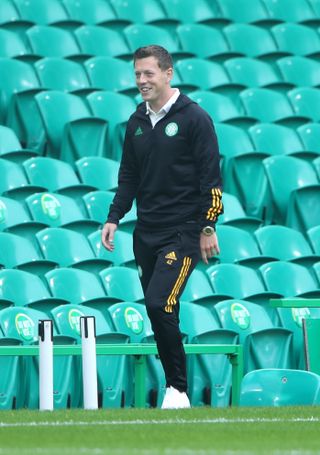 Callum McGregor sees a lot of himself in David Turnbull and would welcome his addition to the Celtic squad.

The Hoops looked set to sign the 21-year-old Motherwell midfielder last season but the deal collapsed when a medical flagged up an knee issue .

The Scotland under-21 international had an operation and missed the majority of the 2019/20 campaign but the move could be resurrected.

Speaking at the club’s Lennoxtown training complex ahead of Champions League second qualifier against Ferencvaros on Wednesday night manager Neil Lennon admitted talks with Turnbull are “as far as I know” on-going and beforehand midfielder McGregor offered up his opinion on the player.

He said: “I think he’s been excellent. Obviously Celtic have been monitoring him for a while and he’s a top young player so I think it’d be good if we could get him in.

“It would be another face and competition for the boys as well and that always drives the standard on.

“His style of play is similar to myself. You want to do everything in the game and chip in with goals and assists as well.

“So he is definitely a young, exciting talent and all the right noises are coming from everywhere.  Everybody likes him, he’s a good kid as well and to get him in would be good for Celtic.

“It is the same every year when boys come in, whether they be midfielders, attackers, defenders, it always helps the squad and  so it will drive the standards up.

Lennon was reluctant to discuss Turnbull, stressing that his focus was on Ferencvaros.

He said: “I have no idea how far or how close anything is, going to be confirmed.

“I have totally been concentrating obviously on Dundee United on Saturday and this game that lies ahead for us tomorrow night.

“It is so important, I can’t have too many distractions elsewhere.”

Celtic hammered KR Reykjavik 6-0 in the first qualifier at Parkhead last week but Lennon insists the Hungarian outfit will offer a much tougher test.

“They negotiated the tie against Djurgardens very comfortably and that wasn’t an easy thing to do.

“Looking at their Europa League results last season, they never lost a game away from home in the group so they know how to travel.

“So that’s what lies ahead for us and it’s going to be a difficult tie.”

He played for the Parkhead club between 1969 and 1977 and won three league titles, two Scottish Cups and the League Cup.

McCluskey, a versatile player, made his debut in a Scottish Cup tie against Albion Rovers in February 1972 and in that season he made eight appearances, including both legs of Celtic’s European Cup semi-final against Inter Milan.

He also played in the 1974 European Cup semi-final against Atletico Madrid.

McCluskey later had spells with Dumbarton, Airdrie and Queen of the South, as well as a season in the United States.

A statement on Celtic’s official website concluded: “The thoughts and prayers of everyone at Celtic are with Pat’s family and friends at this very sad time”.