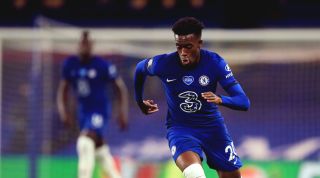 Callum Hudson-Odoi is looking to get more minutes this season - and could leave Chelsea as a result.

The 19-year-old shot to prominence two seasons ago and was a major target for Bayern Munich. Since then, Bayern have opted to sign Leroy Sané instead, with Hudson-Odoi staying put at Chelsea and being rewarded with a bumper contract.

The teenager has also been given his first England cap in that time, establishing himself alongside the likes of Jadon Sancho as one of his country's most exciting young talents.

But in Frank Lampard's precocious squad last season, Hudson-Odoi played less than the likes of Mason Mount and Tammy Abraham. Frank Lampard has refused to rule out letting the winger leave this window - either on loan or permanently - and there's talk that Bayern Munich could rekindle their interest in his services.

CHELSEA The curse of Chelsea's record transfer signings: what will become of Kepa Arrizabalaga?

When asked whether Hudson-Odoi could be heading for the Stamford Bridge exit, Lampard cautiously replied, "I’m going to skirt around that question. It remains to be seen. We’re not in a period where the transfer window or market is acting like it has done in recent years in terms of how players move or what level they move at."

Bayern's squad is stronger than it ever has been but given how much they liked Hudson-Odoi a few seasons ago, they would welcome the chance to add him to the side this season. It looks unlikely that the European champions will sign Ivan Perisic permanently, leaving them one winger short for this shortened campaign.

RANKED! The top 10 Premier League shirts from this season

It looks like Everton could well entertain the possibility of signing the Blues wideman, too. Carlo Ancelotti has favoured James Rodriguez out on the right for the Toffees so far this season, but Hudson-Odoi adds depth - or the opportunity to move the Colombian talisman centrally.

Arsenal are said to be interested as well. The Gunners still want to add at least one more creative spark to the side - and are still chasing Houssem Aouar - but the chance to take Hudson-Odoi on loan could be a chance for Mikel Arteta to bolster his wide options. Chelsea would not include an obligation for Arsenal to sign the teen.

Hudson-Odoi is not the only player who could be departing from Stamford Bridge before the October transfer deadline. Antonio Rudiger has been left out of the Chelsea side lately and could well be heading out, now that he's out of favour.

Chelsea have already brought in Thiago Silva to cover in defence and are expecting Rennes goalkeeper Eduoard Mendy to sign imminently. Despite the influx of new signings this summer, the West London outfit haven't let any first-team players leave so far.