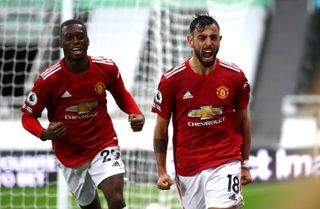 Bruno Fernandes saluted Manchester United’s character after they roared back from their 6-1 Premier League drubbing by Tottenham to crush Newcastle.

It had been a long fortnight for Ole Gunnar Solskjaer and his players after their humiliation by Spurs at Old Trafford and, although they took their time to secure a 4-1 win on Tyneside, they eventually did so in convincing style to exorcise the ghost of a dreadful 90 minutes.

Fernandes told MUTV: “The team has big characters and big players. What happened against Tottenham can’t happen again. We play for such a big club and such a big team. This club deserves better than that.

“Everyone needs to be better, starting with me, I need to look at myself first and then at what the group needs to do better.

“It was perfect after that defeat. We need to continue improving, don’t concede goals and keep scoring.

“We can’t concede as many goals as we have at the start of the season, and I think everyone agrees.”

Events at St James’ Park did not exactly unfold the way United would have chosen when they found themselves behind with less than two minutes gone when Luke Shaw inadvertently turned Emil Kraft’s cross into his own net.

Even after Harry Maguire had levelled with a thumping 23rd-minute header as he put his own difficult spell behind him with an assured display, the visitors were repeatedly frustrated by Magpies keeper Karl Darlow, who made a fine 58th-minute penalty save from Fernandes.

David De Gea had to be equally resilient to claw away a stabbed Callum Wilson effort off the line at the other end, and it was not until the clock had reached 86 minutes that United slipped into top gear.

Substitute Donny Van De Beek picked up the ball inside his own half after Jonjo Shelvey’s free-kick had been cleared and launched a slick counter-attack at the end of which Fernandes produced the most deft of finishes after running on to Marcus Rashford’s back-heeled pass.

Fernandes said: “It was a great goal, but Rashford did what we trained, overlap from me, come inside, little touch… He gave me a great pass and I just needed to do the rest.”

Bruce said: “It is certainly cruel. You’re 1-1 with five minutes to go and then then to get beat four… we were horribly naive towards the end of it.

“We have a free-kick in the 85th-minute and Jonjo puts it in the box and we don’t deal with it on the edge.

“All of a sudden, they’ve broken on you and they’re arguably as good as anybody playing on the counter-attack with what they’ve got and we were caught, which is the disappointing thing.

“We’re disappointed that we conceded the two goals late on, of course, but for me, it didn’t give a true reflection on it.

“We had moments ourselves. But then again, you’re playing against a very, very good side.”