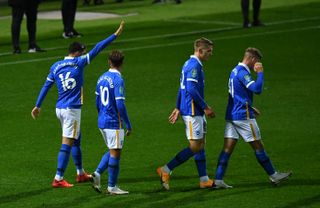 Graham Potter felt Brighton’s second-string had earned the right to face Manchester United next week after seeing off Preston in the Carabao Cup to set up a double-header with Ole Gunnar Solskjaer’s side in the coming days.

United will visit the AMEX Stadium in the Premier League on Saturday before returning to the south coast in midweek for a fourth-round contest in the League Cup.

Potter changed all 11 players from the side that beat Newcastle 3-0 at the weekend, restoring nine of the players that saw off Portsmouth in the Carabao Cup last week and handing starts to Haydon Roberts and Max Sanders.

Though they took time to get going, second-half goals from Alireza Jahanbakhsh and Alexis Mac Allister were enough to get Brighton a 2-0 win and Potter saw enough in the performance to say this side would deserve their chance against United.

“They’ve earned that right,” he said. “They played well, they’ve shown character, personality and quality and I’m delighted with them.

“We go into a game on Saturday, that’s where our focus is. We’ll see how that goes and try to prepare as well as we can and put on a good performance against a side that finished in the Champions League places.

“It’s exciting, whether we play Saturday-Tuesday or Saturday-Wednesday we’ll look forward to that first game and then see what happens.”

Both sides had chances in the first half, with Preston left to rue a Patrick Bauer header that struck the crossbar, but once Jahanbakhsh rifled home a Bernardo cross just before the hour there was little doubt about which way the game would go.

“He’s really close to the starting XI,” Potter said of the Iranian. “Against Newcastle we went with Aaron (Connolly) and Neal (Maupay) but he’s in a really good moment and he’s pushing. His goal was a fantastic strike, I’m really pleased with him.”

Preston’s best spell came in the first half with Brighton slow to get going. Jayden Stockley forced a good save from Jason Steele before Bauer hit the crossbar from the resulting corner.

Preston assistant Frankie McAvoy said: “The first half was a good competitive game. We had a couple of good chances, Jayden brings out a great save and then Bauer’s header comes off the bar.

“The first goal changed the game and we huffed and puffed after that. Obviously the manager’s tried to bring on more legs and go higher up the pitch but the second goal killed it for us.

“It was a great goal from their point over view but it comes from a free-kick that their keeper catches and then they hit us on the counter, so from our point of view we’ll look back at it and pick through the bones and see where we could have stopped it.”