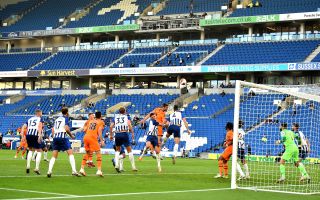 Brighton banished any lingering Premier League relegation fears by grinding out a goalless draw at home to Newcastle to guarantee safety.

Albion controlled possession against the Magpies but neither side seriously threatened to break the deadlock during a dour encounter which had a distinctly end-of-season feel.

The Seagulls have been well placed to extend their top-flight adventure to a fourth campaign for a number of weeks, although manager Graham Potter had steadfastly refused to celebrate survival until it was mathematically certain.

🙌 Not the most entertaining affair, but the point sees Albion secure their Premier League status for another season!— Brighton & Hove Albion (@OfficialBHAFC) July 20, 2020

Leandro Trossard and Adam Webster went closest to a breakthrough for the hosts, while Dwight Gayle and substitute Andy Carroll wasted Newcastle’s best opportunities by each heading off target from corners.

For the 13th-placed Magpies, the battling point prevented them suffering four consecutive losses for the first time since May 2018.

Brighton were back at the Amex Stadium following resounding home defeats to Manchester City, champions Liverpool, and Manchester United in which they conceded 11 times in total.

There was little sign of their defence being breached during an uneventful first half in the Sussex sunshine.

The Magpies had been targeting a top-half finish less than three weeks ago.

But they have endured an unwelcome late-season slump amid mounting injury problems, prolonged takeover uncertainty, and continued speculation about the future of manager Steve Bruce.

After winning 1-0 at Southampton just before lockdown and thumping struggling Bournemouth 4-1 at the start of the month, the visitors were hoping a return to the south coast would prompt an upturn in their ailing fortunes.

Striker Gayle had Newcastle’s only chance of the opening 45 minutes, heading on to the roof of the net from a Jonjo Shelvey corner in added time.

Ryan was finally forced into action six minutes after the restart when he turned away a low effort from Miguel Almiron.

Brighton were unbeaten in the previous five Premier League meetings with their opponents.

They had to wait until the 76th minute for another sight of goal when Webster’s thumping drive from distance was tipped over by Dubravka.

Newcastle could have snatched victory four minutes from time but, after rising above Shane Duffy from Matt Ritchie’s corner, former England striker Carroll directed his close-range header wide of the left post as the disappointing contest ended all-square.