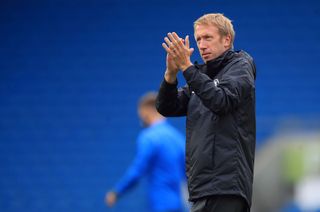 Brighton head coach Graham Potter believes Carlo Ancelotti has stamped his authority on the Everton team this summer and knows his side will be in for a tough match at Goodison Park on Saturday.

The Italian has guided the Toffees to six straight wins this season, leading them to third in the Premier League table and into the Carabao Cup quarter-finals.

Summer signings Allan, James Rodriguez and Abdoulaye Doucoure have settled in well and Potter was full of praise for his opposite number ahead of this weekend’s fixture.

He said: “They’ve been really, really impressive. They’ve invested again in this window and have a very experienced and high-quality manager.

“I think he’s done a really good job there since coming in and stamped his authority on the team further with this window.

“They’ve got some really, really good players and they’re a good team, with good balance, so we’re expecting a really tough match as you can imagine.”

Ancelotti was appointed in December and led Everton to a mid-table finish, but his remit is to take the Merseyside club back into Europe.

During a managerial career which has lasted 25 years, the former Chelsea boss has clinched league titles in his native Italy, England, France and Germany and won the Champions League on three occasions.

Further success with Everton could elevate his status even more, but Potter does not believe it will make much difference.

“I think when you get to (legendary status), that’s the status that he has and I think he’ll always be that way because of what he’s achieved,” Brighton’s boss added.

“And yes he’s somebody that I look up to a lot and respect a lot because of the career he’s had and the job that he’s doing currently.”

While Potter, 45, is full of admiration for 61-year-old Ancelotti, he would dearly love to watch Brighton claim a second league win of the campaign at Goodison Park.

Yves Bissouma will return after his three-match ban for a red card away to Newcastle and is expected to line up alongside Adam Lallana and Steven Alzate in a three-man midfield.

The latter has been one of the Seagulls’ most consistent performers so far this term to back up a fine breakthrough 2019-20 campaign.

Alzate, who moved to the Amex Stadium three years ago from Leyton Orient, made 21 appearances last season before a groin injury ruled him out of action when football restarted in June.

He is now fit again and there is more to come from the Colombia international, according to his manager.

“He has impressed from day one pretty much in terms of his attributes because he is good with the ball, strong and able to deal with the physicality of the league,” Potter said of the 22-year-old.

“At the same time he has really good quality and wants to learn and improve and get better, so that is also a good thing to have.

“He played for us last year in a number of positions, which shows his versatility and then probably a little bit of a setback at the back end of the season in terms of the injury and we didn’t use him.

“We always knew his quality, capacity and potential. Our job now is to try and push him forward because I think there is more to come as well, but we are happy with him.”