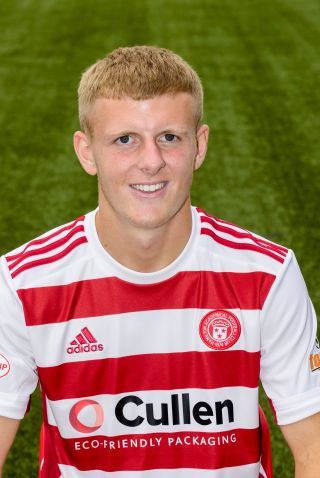 The 18-year-old was handed his maiden start for Accies against Livingston, replacing the suspended Scott McMann, and capped a superb showing with a clinical late header to secure a 2-1 victory.

Rice is adamant he had no fears about pitching Munro into the Lions’ den – and was delighted that he was the man on the end of David Templeton’s delivery in the dying embers.

Rice lauded: “Kyle did well on what was his full debut. He’s very quiet, doesn’t say too much, but I know he can head the ball – and I was hoping it was him coming in at the end!

“It’s absolutely fantastic for anyone to score a winner, but to do it on your full league debut is something the kid will never forget.

“These kids here are ready to go. They were waiting their turn and you can see they can play.”

While Munro will hog the headlines, Templeton was the undoubted man-of-the-match, cancelling out Shaun Want’s early own goal, teeing up the dramatic late winner and proving generally irrepressible in the number 10 role.

“David is a match winner and he changes games,” added Rice. “He’s a huge asset for us and you saw that today with his goal and assist, but he needs other players working hard for him because he’s not getting any younger.

“But the work-rate and the effort was just typical for a Hamilton team.”

Livi have now lost two games at home this season – Hibernian and Hamilton – having previously made the Tony Macaroni Arena a fortress.

Holt added: “If you don’t defend your box you don’t win games, it’s as simple as that.

“It was naive for us to think somebody else would clear the free-kick. You go and clear it – you go and do your job. And if you don’t do it, you ain’t gonna play next time.

“At the end of the day you have got to have the desire to put your head in where it hurts – and we have lost two soft goals.”