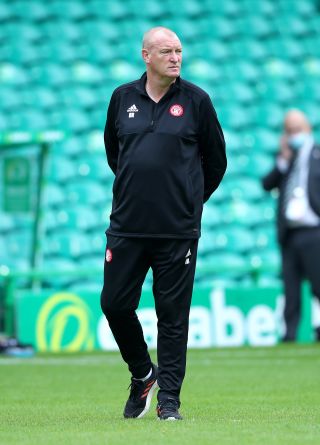 Brian Rice insists belief will be key if Hamilton are to overcome Rangers on Saturday.

Accies got their first Premiership win of the season last weekend at the fourth attempt with a 1-0 derby win over Lanarkshire rivals Motherwell at Fir Park.

Rice’s side are now preparing for the visit of the Light Blues, who are top of the table with 13 points from five games and without conceding a goal.

He will not pay too much heed to Hamilton’s surprise 1-0 win at Ibrox the last time the two sides met in March –  “it is done and dusted, it is two completely different teams” – but stressed the mindset must remain when asked what the most important attribute in getting a result from  the Old Firm clubs was.

The Accies boss explained: “Belief that they deserve to be on the same pitch.

“Belief that they can get something out the game, trust in each other and trust in the game plan.

“All the video work is done on us. Our good moments against the Old Firm. The chances we create, the goals we score.

“I don’t need to show them too much of Rangers and Celtic, the media does that for me. I concentrate more on our aspects of play against the Old Firm.