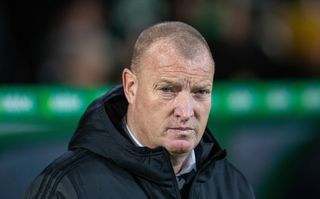 Hamilton head coach Brian Rice insists he could only enjoy their Betfred Cup win over Ayr for a fleeting moment before turning his attention to their next challenge.

Accies got their Betfred Cup campaign back on track as they bounced back from their opening 3-1 defeat to League Two outfit Annan to seal a 2-1 win.

Marios Ogkmpoe and Charlie Trafford’s first half strikes sealed the three points against Ayr, who pulled one back through Michael Moffat with 20 minutes remaining.

Hamilton, however, held out for the win which keeps them in the mix for progressing to the knock-out rounds.

Rice was delighted with the win but admits that jubilation doesn’t last for too long before he starts to focus on their next game against St Johnstone in the Scottish Premiership.

Rice said: “Every time at quarter to five on a Saturday you feel relief when you’ve won, it doesn’t matter who you have played.

“Then it’s gone. You get half an hour to enjoy it and then prepare for next Saturday. That’s how it is in football when you are a manager or a head coach.

“You get half an hour to enjoy it and then you start worrying about next week.

“And if you lose, it lasts all week.

“But I’m delighted for the boys, especially to win at home. It was a good win for us.”