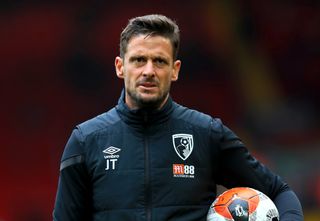 Bournemouth boss Jason Tindall says he would like to add a couple of signings to his squad as they begin their Championship campaign.

The Cherries have seen star players Nathan Ake and Callum Wilson depart over the summer following relegation from the Premier League last season, while David Brooks and Josh King have also been linked with moves away.

Tindall, who replaced Eddie Howe in the dugout and begins his managerial career with a home game against Blackburn on Saturday, knows he needs some reinforcements, but is biding his time

“We’ve got a good squad,” he said on the club’s official website.

“There are some very good players who have left the football club, players who are very difficult to replace. But we have a very good squad here and from the pre-season performances I’ve been very pleased with what I’ve seen.

“Do I want to bring in a couple of new players? Of course, you need quality players to call upon at any time. We’ve identified two or three players who we think could enhance the group but we don’t want to jump in and make any rash decisions.

“The transfer window still has a few weeks to go and we have plenty of time to bring in the right players.”

The Cherries are at least boosted by the return of Chris Mepham, who has played just 10 minutes of competitive football since January following a serious knee injury.

The defender played in last week’s friendly at West Ham so should be involved.

“Meps is doing well, it was great to have him back a few days prior to the West Ham game and came through with no problems,” Tindall added.

“He was out for some time before that but to see how he performed was a great boost for us.”