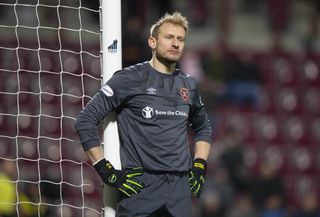 Bobby Zlamal admitted playing in goal for St Mirren against Hibernian had come at the end of a “strange week”.

The Hearts player had been summoned on emergency loan by Saints manager Jim Goodwin after all three of his goalkeepers – Jak Alnwick, Dean Lyness and Peter Urminsky – were ruled out due to coronavirus protocols.

Zlamal was unable to prevent his new team from going down to a 3-0 loss and admitted he was still trying to make sense of it all.

The Czech said: “It was a very strange week. If someone had told me on Friday I would be playing in a Premiership game against Hibs on Saturday I wouldn’t have believed them.

“I played 90 minutes with Hearts in a friendly on Friday and then on Saturday I played another 90 minutes. It is crazy – but I had to be ready for it.

“I met the other St Mirren players just two hours before the game. I shook hands and then played.

“On Friday when I knew I was coming I was looking at the squad at the names. There were a few I knew but I was trying to make sure I knew the back four.

“I was disappointed because we didn’t win. It was an unlucky game for us. We had some chances but we didn’t score.”

Zlamal will train with the squad on Monday and Tuesday ahead of St Mirren’s rearranged game with Celtic on Wednesday.

The 34-year-old added: “I will get the chance to prepare more. I only found out the day before the Hibs game that I would play for St Mirren which is mad but at least I now have a few days to get ready.

“Jim Goodwin called me and said he appreciated that I would come to play. I know it has been difficult for them and they couldn’t train on Friday.

“It is very difficult and it is not fair. It will be a tough season. No fans and you never know what is going to happen like this.”

Meanwhile, Hibs manager Jack Ross praised the contribution of forwards Jamie Murphy and Martin Boyle in the win over Saints.

He said: “Jamie gives us a different dynamic. He picks up more narrow areas of the pitch and pockets than Martin does.

“Martin enjoys that width and it is a good balance to have between your two wide players.

“Jamie is a very, very good player and I have been hugely impressed with him.”