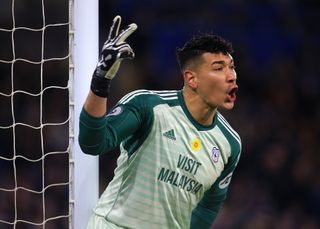 Birmingham are close to the signing of Cardiff goalkeeper Neil Etheridge.

The 30-year-old is expected to move to St Andrew’s ahead of Saturday’s Sky Bet Championship opener with Brentford.

He said: “He (Etheridge) is a player who is on our list but the club is doing a very good job, the relationship I have with the CEO is really good.

“If he arrives it will be perfect, if he doesn’t another one will arrive and will be the right one and a player we wanted.

“He has experience, promotion experience, which is important as well with players like (Adam) Clayton and George (Friend) they know how nice it is to get promoted. Let’s see what happens.”

Etheridge helped Cardiff to promotion to the Premier League in 2018 after joining from Walsall in 2017 and has made 102 appearances for the Bluebirds.

“We gave him permission not to, so it gives an inkling of how advanced it is.

“I’m always wary until things are signed, but I wouldn’t be surprised to see Neil at Birmingham in the coming days.

“There is a good transfer fee involved, I’m led to believe. He’s in the last year (of his contract), but he’s a good Championship goalkeeper and it’s a decent size transfer fee.”