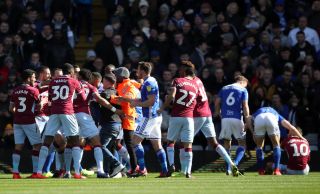 Birmingham have been fined £42,500 after a supporter ran on to the pitch and punched Aston Villa captain Jack Grealish during the derby match at St Andrew’s in March.

The Sky Bet Championship club has also been warned about their future conduct, the Football Association has announced.

Paul Mitchell, 27, was sentenced to 14 weeks in prison after pleading guilty to assault and a charge of encroaching on to the playing surface.

He was given a 10-year football banning order and Birmingham banned him for life from St Andrew’s.

Grealish went on to score the winner in Villa’a 1-0 victory.