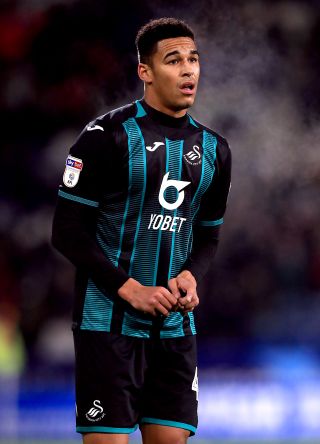 Ben Cabango knew he had completed his journey from the Welsh Premier to the Wales squad this week when the first person he met was Gareth Bale.

The 20-year-old central defender has had a rapid rise over the last 12 months, establishing himself as a Swansea regular since making his league debut last November and producing form to earn a first call-up for Ryan Giggs’ Wales squad.

But that was not enough to prepare Cabango for the sight that greeted him at the team hotel when he arrived for this week’s Nations League double-header against Finland and Bulgaria.

“Straight away I walked in and Gareth is sat there on the sofa,” Cabango said of the Real Madrid superstar.

“It was surreal to get to know him straight away. But he’s a down-to-earth guy and all the team have welcomed me very well.

“It’s been weird with all the Covid restrictions as we’ve all had to isolate in our rooms.

“It’s been difficult circumstances but I’ve tried my best to get to know the boys. It’s been surreal to be among these players, but it’s a dream come true to get called up for Wales.”

Cabango’s passage to the Wales squad has not followed familiar lines.

He started out in local football in his home city Cardiff before joining the youth academy at Newport and moving on to Swansea.

Having just turned 18, he then decided to join Welsh Premier champions The New Saints on loan and played – and scored – for the Oswestry-based side in the Champions League.

“The TNS loan move really helped me mature as a person and as a player on the pitch,” Cabango said.

“I didn’t really know about the club but there was pressure there to win the league, and I thought playing against men would be the best way to evolve my game.

“As soon as that six-month loan ended I came to back to Swansea and I was a better player.

“The gaffer (Steve Cooper) saw that in me straight away and gave me that opportunity. I took it and I’ve been working hard since then.”

Younger brother Theo is part of the Cardiff Blues youth squad and Cabango was also making a name for himself in rugby before focusing fully on football.

Congratulations to former skipper Ben Cabango on getting called up for Wales, all those Paulo and Mark training sessions are starting to pay off! Shame there’s no Finn Dixon to hold your hand! Always knew you you were destined for greatness Ben, keep going mate! https://t.co/J0GptPlNcKpic.twitter.com/W83mNduxVr— Maindy Corries Youth (@mcorriesyouth) August 25, 2020

“I got into Cardiff Schools as a number eight and played up until year nine,” Cabango said.

“But that’s as far as it went. Football was always my better sport… and the size of the players now I don’t think I’d want to play rugby!

“I’ve worn that (Wales football) badge since the Under-15s, and hopefully I’ll get that feeling now with the first team.”