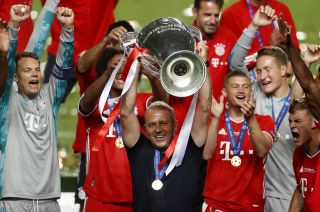 Joshua Kimmich has revealed Bayern Munich went into their Champions League final showdown with Paris St Germain with a sense of “invincibility”.

Defender Kimmich told the club’s official website: “It is the biggest day of my career. I can’t describe what it means to be on the pitch with a team like this one.

“Winning a title like that with brothers is the best you can achieve. Hansi Flick has given us a very good feeling in the camp and given us a lot of confidence right from the off.

“Each victory has given us more and more confidence. When you make mistakes, someone else makes up for them.

“We weren’t without mistakes (in the final) either, but we had a slight feeling of invincibility. I think we deserved to win this competition.”

Free-scoring Bayern – who put seven past Tottenham in North London in October, scored six against Red Star in Belgrade in November and trounced Barcelona 8-2 in the quarter-finals – were nevertheless indebted to the resilience of keeper Manuel Neuer for the clean sheet which provided the foundation for their 1-0 win.

Forward Thomas Muller said: “It feels incredible. We’ve been on a journey, we’ve come relatively far from how we felt in the autumn, and then we went on a run that was sensational.

“We’ve also deserved this feeling. We have the team spirit – the boys are ready to toil. We also rode our luck and had Manuel Neuer between the sticks.

“It wasn’t our best game, but we hung in there and now we’re on top.”

For Frenchman Coman, victory against his former club was bittersweet, but no less welcome as a result.

He said: “I’m very, very happy, of course, I really must emphasise that. It was an incredible evening, not only for the club, but for all the fans.

“I wanted to play well, but that’s nothing against PSG. I’m just 100 percent FC Bayern now and I wanted to win so badly.

“And I just had to be professional, I couldn’t think about that during the game. Of course it’s a pity for Paris and I feel for them because I come from the city.”

For PSG, whose Qatari owners have poured so much money into the quest to land European club football’s biggest prize, defeat ended a bid for a fifth trophy of the campaign in heartbreaking fashion.

However, departing defender Thiago Silva was able to take comfort from the experience of Liverpool, who bounced back from defeat by Real Madrid in the 2018 final to win the competition against Tottenham 12 months later.

He told the club’s official website: “We’ve not finished this competition in the way we’d hoped – they were more clinical in front of goal than us – but I’m proud of our team.

“To win major trophies, you have to go through this. I remember Liverpool lost a final before winning it the next year.

“We have to think positively. I won’t be here any more, but I’ll be an extra supporter.”