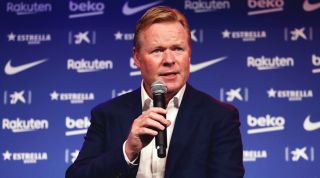 A new attacker should be a priority for Barca, who are struggling to gel up top. Lionel Messi, Antoine Griezmann and Luis Suarez have not combined effectively together regularly, with Philippe Coutinho having left on loan and Ousmane Dembele almost frozen out entirely.

Despite this weakness in the final third, however, it appears that the Catalan club are more focused on signing defensive options - having been linked strongly with Eric Garcia in recent weeks - and improving a midfield which is already welcoming Miralem Pjanic next season.

With Koeman now entering the fold, the Dutch coach has identified a number of options that he'd like to add to his side - including countryman Georginio Wijnaldum from Liverpool.

JOSHUA KIMMICH 'Liverpool were just stronger than us in the Champions League last year. It has hurt since 2013'

Koeman knows Wijnaldum from his time in the Dutch set-up. With Arturo Vidal aging and many of Barcelona's midfielders more comfortable in the first and second phases of the pitch - such as Frenkie De Jong, Sergio Busquets and the incoming Pjanic - Wijnaldum has stood out as an option to boost Barcelona's ranks.

Given the ongoing contract situation at Anfield, it's thought that the two clubs could strike a deal relatively easily. The Reds have a ready-made replacement lined up in Thiago Alcantara, too.

Barcelona are no strangers to doing business with Jurgen Klopp's side - the most recent case being with the transfer of Coutinho in January 2018. Since then, there has been talk of Blaugrana interest in both Sadio Mane and Mohamed Salah, though nothing beyond conjecture.

Koeman may also look to another Dutchman in his search for more of a driving midfielder in his new squad.

Donny van de Beek of Ajax has been continuously linked with the likes of Manchester United and Real Madrid, following the Amsterdam club's magnificent Champions League run last season. Now, it's thought that Koeman may look to bid for the midfielder, who provides late runs into the box as well as an energetic presence in the centre of the park.

Barcelona still risk losing Lionel Messi too. It's understood that the captain is closer to the exit than he is to staying at the club, with Manchester City the favourites to land his signature.