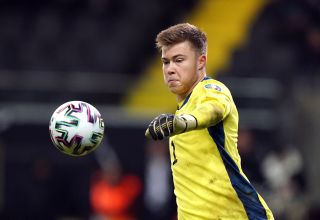 Back-up Burnley goalkeeper Bailey Peacock-Farrell has signed a 12-month contract extension to keep him at Turf Moor until June 2024.

Northern Ireland international Peacock-Farrell joined the Clarets from Leeds last summer but is yet to make an appearance for the Premier League club.

He served as understudy to ever-present England international Nick Pope in the top flight last season, while Joe Hart was preferred for cup ties.

The 23-year-old, whose new deal includes the option of a further year, told Burnley’s website: “I’m delighted and it didn’t take long to do because it was a no-brainer.

“I haven’t managed to play in the Premier League at the moment but that’s the long-term goal of mine, as with everyone here.

“Obviously Popey’s there and rightly so. He’s had an incredible season, but I’m here to help support him but also challenge him because we both want to do the same thing.”

Peacock-Farrell, who has continued to be selected by his country and won 13 international caps, has not played a club match since appearing for Leeds in a 3-2 Sky Bet Championship victory over Millwall in March 2019.

His chances of making a debut for Sean Dyche’s side during the upcoming campaign have been boosted by former England keeper Hart departing on a free transfer to Tottenham.