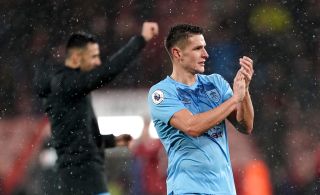 Westwood’s previous deal at Turf Moor was due to expire next summer.

The 30-year-old has made 98 Premier League appearances for Sean Dyche’s Clarets since signing from Aston Villa in January 2017.

“Ever since I’ve been here, I’ve been welcomed,” Westwood told Burnley’s website.

“The gaffer has been brilliant, the lads are phenomenal and the fans have taken to me, which is the main thing. It really feels like home now.

“I still feel I’ve got plenty more to give. I feel fit, touch wood I’ve been lucky with injuries, and the way we train and do things here stands me in good stead for, hopefully, a long career.”

Westwood has featured in each of Burnley’s three games this season and is set to start against Southampton on Saturday evening.