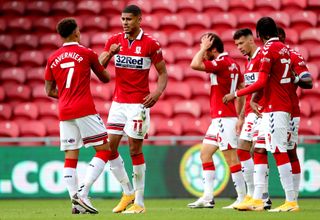 Middlesbrough claimed their first home win since Boxing Day as they edged a seven-goal thriller with Shrewsbury 4-3 in the first round of the Carabao Cup.

Ashley Fletcher scored twice, with Marvin Johnson and Marcus Tavernier also finding the net as Boro made a winning start to the new season.

However, Shrewsbury more than played their part in an entertaining affair, with goals from Scott High, Jason Cummings and Rekeil Pyke ensuring the home side were never able to relax.

Shrewsbury’s last competitive outing was back in early March, but the Sky Bet League One side showed little sign of ring rust as they claimed an early lead.

There appeared to be little on when Shaun Whalley cut infield to roll a 13th-minute pass into High’s path, but after shuffling the ball onto his right foot, the Shrews midfielder cracked a superb 25-yard finish past Dejan Stojanovic.

Shrewsbury almost doubled their lead moments later, with Pyke stealing ahead of Anfernee Dijksteel to head Scott Golbourne’s cross over the bar, but Boro restored parity midway through the first half thanks to a horrendous goalkeeping error from Harry Burgoyne.

The Shrewsbury stopper should have made a routine save when Johnson met Lewis Wing’s cross with a first-time volley, but he fumbled the ball into his own body and it rebounded across the line. Burgoyne tried to atone for his error by clawing the ball to safety, but it had clearly crossed the line and referee Michael Salisbury rightly awarded a goal.

Ten minutes later and the home side were ahead, with Johnson once again playing a prominent role. The left wing-back delivered an inviting low cross towards the edge of the six-yard box and, having edged ahead of his marker, Fletcher opened his account for the season with a slick first-time finish.

Johnson almost found Fletcher again at the start of the second half, and while Shrewsbury defender Ethan Ebanks-Landell made an important interception on that occasion, the wing-back’s breaks down the left were a key part of Boro’s attacking play all night.

Ultimately, though, the hosts were heavily indebted to Burgoyne, with the Shrews keeper making his second bad error shortly before the hour mark to enable Middlesbrough to extend their lead.

Having been forced to the edge of his area, Burgoyne scuffed a dreadful attempt at a clearance to Tavernier, who quickly moved the ball infield to Wing. With Burgoyne scrambling back towards his goal, Wing fired a 40-yard effort against the post, enabling Fletcher, who was following in, to bundle home the rebound.

With the action proving fast and frenetic, Shrewsbury got themselves back into it on the hour mark. Britt Assombalonga inadvertently nodded a corner into Cummings’ path, and the midfielder curled a neat finish into the corner.

Boro restored their two-goal lead almost immediately though, with Tavernier picking up a loose ball following a free-kick and drilling in a fierce finish that beat Burgoyne via a hefty deflection.

However, Shrewsbury were still not beaten and the visitors made it 4-3 as Pyke beat the offside trap to slot home after Golbourne’s through ball picked him out.