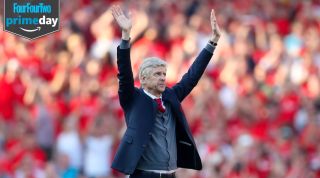 'My Life In Red and White', the autobiography from Arsene Wenger, is already the most hotly-anticipated book of the year. Now, it's even cheaper on Amazon, thanks to Prime Day.

Not only does this make it the perfect Christmas present for the Arsenal fan in your life but a bargain at the same time. Monsieur Wenger himself would approve of such shrewd business in the market.

Ever since the former Arsenal boss announced his book, excitement has been high - not just from Gunners fans but football fans around the world. For two decades, Wenger helped shape the Premier League and football in general, with his classy, charismatic style of play and commitment to his own values.

Buy Arsene Wenger's autobiography, 'My Life In Red And White' on AmazonView Deal

'My Life In Red And White' promises not to be a tell-all expose of his latter years in North London but a celebration of how he helped revolutionise the game. One of the most important figures in modern football, the Frenchman is famed for his philosophy, intelligence and insight - and his autobiography is more of the same.

Interviews with the French footballing legend are currently circling online. Be sure to subscribe to FourFourTwo or pre-order the November issue now to learn more from Wenger's time at Arsenal.

Buy 'My Life in Red and White: My Autobiography' by Arsene Wenger on Amazon now