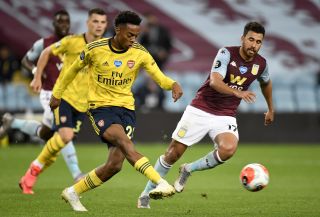 Arsenal midfielder Joe Willock insists the young players in Mikel Arteta’s squad will continue to snap at the heels of the established stars after Wednesday’s third-round Carabao Cup victory at Leicester.

The Gunners made seven changes for the trip to the King Power Stadium, where a Christian Fuchs own goal and a late tap-in for Eddie Nketiah secured a 2-0 win for the visitors.

Willock and Nketiah were joined in the starting line-up by Bukayo Saka, Reiss Nelson and Ainsley Maitland-Niles as Arteta continues to give chances to the young players at his disposal.

Of that quintet, Saka and new England international Maitland-Niles are the only ones to start a Premier League game so far this season.

But, with fixtures coming thick and fast, Willock believes the core of young players can provide the right level of competition to keep things fresh.

“That is our job as players, as youngsters,” he said.

“We’re always trying to make it difficult for the manager to make a decision who plays on the weekend.

“So that is what we’re trying to do, we’re all trying to push each other to be better and play as good as we can.”

Willock also praised Arteta’s hands-on approach and the clear way in which he wants his team to play.

“There are things that we have to do and there is nothing we can’t ask, we can always ask him to help us.

“That is what I did before the game – slotting into midfield I asked him a few pointers and I thought I did well.”

While Arteta rotated his side, Leicester boss Brendan Rodgers changed his entire starting XI from the weekend win over Burnley.

That included a first start of the campaign for captain Wes Morgan, who felt the Foxes performance was not echoed in the result.

“I thought we competed very well for most of the game,” he told LCFC TV.

“We had a couple of chances, (James) Maddison had a great strike at the goal which came off the post, so yes, it was pretty even in the first half.

“I think we were probably unlucky to concede the type of goals we did. It just dropped for them and, obviously, they made the most of the opportunities.

“But I think overall we could be satisfied with the performance. It was good to get out there, get some minutes.

“I’ve only played 30 minutes in the pre-season games so to get 90 under the belt felt good.”