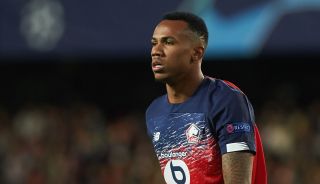 Arsenal are set to sign Lille defender Gabriel Magalhaes after agreeing personal terms with the 22-year old. The London club will pay €30m for the Brazilian, who made 34 appearances for the French club last campaign, scoring one goal in Ligue 1.

Gabriel Magalhaes was reportedly a target for a number of Premier League rivals, including Manchester City and Manchester United, and Gunners coach Mikel Arteta will be relived to have persuaded the player to come to north London. He has reportedly agreed a five-year deal at the Emirates.

Gabriel Magalhaes will join William Saliba, the 19-year-old who was loaned back to Saint-Etienne last campaign, at the Emirates next season as Mikel Arteta looks to rebuild a suspect back line. Current central defenders David Luiz, Shkodran Mustafi, Sokratis, Rob Holding and Pablo Mari all struggled with form and injuries at various stages last season. It is expected at least one will be sold.

Fans are also hopeful that Pierre-Emerick Aubameyang will sign a new deal in the coming days. Media reports suggest an offer has been agreed by Arsenal and the Gabonese striker, who hit 22 Premier League goals last term. The player has not yet put pen to paper but club officials are now confident fresh terms will be signed in the coming days.

It was suggested last week that Aubameyang, who has just less than 12-months to run on on his current contract, was waiting to see if any other offers materialised, though he is now believed to be keen to stay.

Signing Aubamyenag would be seen as a huge boost for the club going into the new season. The 31-year old was once again the side's standout player last term, scoring twice in Arsenal's FA Cup final win over Chelsea in early August.

The arrival of Willian, on a free transfer from Chelsea, has added proven Premier League experience to Arteta's front line next season, though it is felt business will need to be done to the midfield in order to ensure the club can compete with the top six next season.

Arteta would like Dani Ceballos, the playmaker who spent last season on loan at the Emirates from Real Madrid, to join for at least another season, while Matteo Guendouzi and Mesut Ozil have been made available to buy.