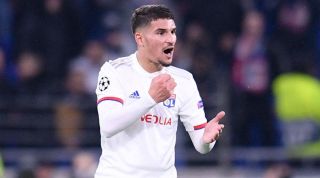 Arsenal will continue to spend money this summer and are looking to bring in a pair of long-term targets over the coming weeks. According to reports in the Mirror, Thomas Partey, from Atletico Madrid, and Houssem Aouar, from Lyon, will be the focus before the close of the transfer window on October 5.

The Gunners tied-down Pierre-Emerick Aubameyang to a three-year contract this week, and have already sent big on a number of signings this summer, but Mikel Arteta is keen to strengthen a squad which finished only eighth last season.

Defenders Gabriel Magalhaes, Pablo Mari and Cedric Soares have all arrived at the Emirates Stadium on permanent deals, as well as forward Willian on a free transfer from Chelsea, but Arsenal aren't done yet.

After strengthening his defence and front line, Arteta will now turn his attention to midfield, with enforcer Partey, 27, and 22-year old playmaker Aouar top of the list.

Partey has been a target for several windows, with his tenacity and work rate seen as an upgrade on those of Lucas Torreira, who may be sent out on loan this season.

Aouar, meanwhile, is one of the most highly-rated attacking midfielders in Europe, after putting in a number of eye-catching displays in the Champions League this season. The uncapped-Frenchman scored 10 goals and laid-on 9 in just over 40 appearances for the Ligue 1 side last season.

With Mesut Mesut Özil seemingly not part of Arteta's long-term plans, Arsenal are crying out for some creativity in midfield and the £40m-rated Aouar is considered the ideal replacement for the German.

Meanwhile a number of first team players will need to be moved on between now and the end of the window. It is believed Özil, Torreira and their fellow midfielder Mateo Guendouzi are the highest profile players open to offers.

While you’re here, why not subscribe to the mag - and get every issue for less than £3.80 delivered to your door!