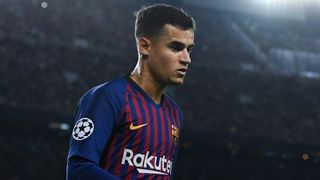 Arsenal are reportedly reconsidering their stance on loaning Barcelona playmaker Philippe Coutinho. The Brazilian is seen as a risk-free backup option should a deal to sign Houssem Aouar from Lyon prove too complicated.

Aouar remains the number one choice for Arsenal boss Mikel Arteta, who is desperate to enhance his side's creativity before the transfer window closes on October 5. However, with Lyon refusing to budge on their £54m asking price, Arsenal are considering alternative options.

Coutinho, who has been frozen out at Barcelona, would represent a solid short-term option. The 28-year-old has proven Premier League experience from his five years at Liverpool, and helped Bayern to Champions League glory during his loan spell at the Bavarian club last season.

Arteta has made it clear he needs some additional inspiration in his midfield, with Mesut Ozil's playing days at Arsenal apparently over. The German has a year left on his lucrative contract and has refused to countenance a move away from the Emirates. Arteta has made it clear the 31-year-old is not part of his immediate plans.

The Spaniard's other creative midfielder, Dani Ceballos, is a loan signing from Real Madrid, and struggled with form and fitness on loan at Arsenal last season.

Aouar dazzled as Lyon reached the quarter-finals of the Champions League earlier this year, and has been monitored by a number of Europe's top clubs throughout the summer. The Frenchman is keen on a move to Arsenal, but Lyon's asking price is proving prohibitive.

Reports suggest Arsenal may be forced to sell a high profile forward player in order to generate funds, with talks of Alexandre Lacazette being made available. The French striker has started the season well, however, scoring in both of Arsenal's victorious Premier League fixtures so far.