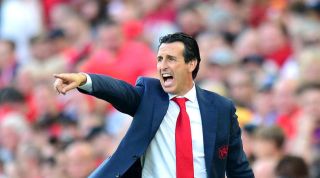 Arsenal managing director Vinai Venkatesham says the club will not be busy in the January transfer window.

The Gunners broke their transfer record to purchase Nicolas Pepe from Lille for £72m this summer, as well as acquiring David Luiz, William Saliba, Kieran Tierney and Gabriel Martinelli for a combined £67m.

Only Manchester United and Aston Villa spent more on new signings ahead of the 2019/20 campaign than Unai Emery’s side.

That has left Arsenal short of cash, and although Venkatesham has not completely ruled out incomings when the transfer window reopens, he does not expect the club to be active.

“We’ve just been through the transfer period in the summer, that’s what we always call the main transfer window,” he told Bloomberg.

“And we were very aggressive in that transfer window, signing a number of new players that we are very excited about – predominately targeting young players that we believe can grow and develop with us over future years.

“When we look forward to January, we’ll see when January comes. I’d say that we always treat the summer window as being the more strategic window.

“And the January window is the one where you need to be a bit more tactical, maybe responding to an injury or another demand. But really our work was done in the summer – and we’re really pleased with what we did in the summer.

“We’ve been really focused over the summer. We made some defensive reinforcements, signing David Luiz from Chelsea and Kieran Tierney from Celtic. We’re looking forward to seeing how those players progress and how they do over the course of the season.”

Arsenal, who advanced to the fourth round of the EFL Cup with a 5-0 victory over Nottingham Forest on Tuesday, return to action in the Premier League against Manchester United on Monday.