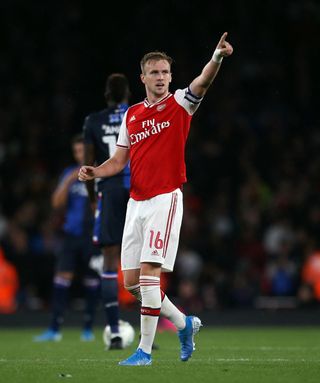 Arsenal defender Rob Holding admits he could not have scripted a better comeback after ending a nine-month injury nightmare by scoring with his first touch as stand-in captain.

Holding had just taken the skipper’s armband from the substituted Mesut Ozil when he powered home the Gunners’ second goal during Tuesday’s 5-0 Carabao Cup demolition of Nottingham Forest.

The 24-year-old managed the full 90 minutes at the Emirates Stadium having previously not made a first-team appearance since rupturing the anterior cruciate ligament in his left knee at Manchester United in December.

“The dream comeback really for me. My first touch as the captain – you can’t write that any better,” said Holding.

“It was a proud moment for me to put the armband on. We’d had a couple of corners just before when I was just a little bit away from it so I could feel it was coming, then Reiss (Nelson) put a great ball in and I managed to get my head to it.

“It’s been a totally new experience. I’ve never experienced a long-term injury like that before.

“But credit to the club and the medical staff and the fitness people. They’ve put their arms around me and got me through it. It (the return) was a good experience and I was over the moon with it.”

Brazilian forward Gabriel Martinelli started and finished the rout against the Sky Bet Championship visitors with his first Arsenal goals on his full debut, with academy graduates Joe Willock and Nelson also on target.

It's your first game back in the first team… You go up for a corner in front of the North Bank… And then this happens…— Arsenal (@Arsenal) September 25, 2019

In a triple boost for Gunners boss Unai Emery, Hector Bellerin joined Holding in returning from serious knee ligament damage, while £25million summer signing Kieran Tierney made an overdue debut after being sidelined by a groin problem.

Holding is grateful to the Spanish full-back and former Gunners forward Danny Welbeck for their vital support during his long road to recovery.

“Even though it’s horrible to say it, it helped having Hector who was going through the same thing. You’ve got a little buddy in the gym,” said Holding.

“And when Danny Welbeck was still with us, he had a long injury. So there was three of us who were together and getting each other through it.”

Holding has been impressed by his new team-mate on and off the field.

“I think he was brilliant, I loved having him on the left side of me,” said former Bolton player Holding.

“He was solid and for his first game back from a double hernia operation you can’t ask for any more than that.

“He’s good (in the dressing room), a good Scottish lad who brings a bit of banter to the team. He and I are getting on really well, you couldn’t ask for a better way for him to settle in.”